Early morning train to the AirTran, to the plane, first to El Salvador and then to Peru, before I would finally board my flight to Montevideo, Uruguay. After the disappointment of not being able to see my brother's family for Christmas, and spending a quiet, but enjoyable holiday with my mother, I was looking forward to a little nightlife and adventure in South America.

When I arrived at the airport I was greeted by super friendly people who explained the currency and how to get a cab. I explained that a friend was getting me but thanked them for their kindness. Walking out of immigration, I met up with Michelle who took me on a brief orientation tour of Montivideo before we headed east on our road trip to the coastal beaches of Uruguay. Our first stop was at a grocery store to pick up supplies, but this wasn't a grocery store I was accustomed to; Tinenda Ingles Hypermarket is a weird combination of a supermarket mixed with Target mixed with Cosco, oh yeah, and you greeted by a giant, lifelike, mechanical dinosaur when you walk in…nice touch.

We headed first to Piriapolis, a 1930s resort town that sits along Uruguay,s eastern coast on one's way to Punta del Este. We didn't stay long, or stop anywhere which was probably good being I was practically passed out from the plane ride here. We decided to pull up the car overlooking a bluff and take a nap. After we took a brief siesta, we headed up to Punta Bellena to visit the Casa Pueblo, the home and studio of famous Uruguayan artist Carlos Paez Vilaro. The sight is now one of cultural interest, with the different rooms displaying his paintings and various sculptures, and an amazing view of the water below.

One of the stranger things I've encountered on the road are the bumper stickers advertising rice, which seem to be on everybody's car.

From Casa Pueblo we headed towards Punta Del Este with the intent of having lunch and maybe walking around a bit, but once we arrived both of us immediately changed our mind. The vibe in Punta Del Este is similar to most beach resort towns that are also party central, but this is not, nor has ever been my vibe. Fortunately, Michelle agreed. The only attraction to “see” in Punta Del Este is the giant hand that comes our of the beach at Playa Brava. After a quick photo op with the hand, we headed back on the road towards La Pedrera, a sleepy little town perched up on bluff overlooking the Atlantic. We found a quaint Bungalow to spend the night and headed out to get some food, only it was 4pm and all the restaurants were closing up till dinner. Plan B! Empanadas and beers to go. Headed to the beach and passed out for a couple of hours. 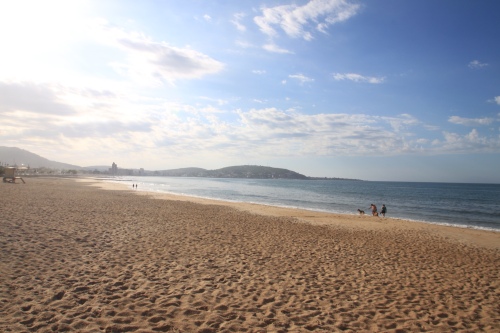 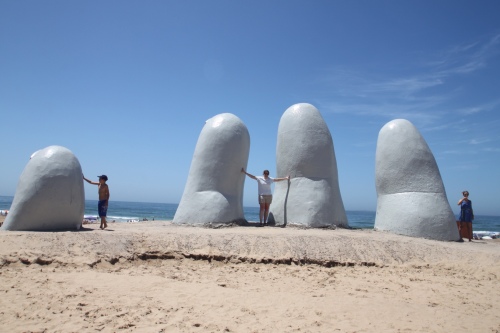 After living like hobos on the beach we headed into to town, had a glass of wine at Don Romulas, mainly just to use the internet. From here, by recommendation we headed to Costa Brava, an amazing seafood resturaunt that sits high on a bluff overlooking the beach. The “fruit of the sea” was delicious, as was the Savignon Blanc that washed it down. A little buzzed, we headed back into town with the smell of marijuana freely breezing through the air to see if the gelato shop Pop's was still open. Not only was it open, it was hopping with people who were either waisted, stoned, or under the age ten.

The next morning we headed to the local bakery, fueled up on some pastries and espresso and then were on road again. Our destination this time was Cabo Polonia, a small fishing village that has recently turned into an artist colony. One can't get to Cabo Polonia by car, you have to hire a truck to take you over dunes and through a forest. Even though we didn't have any accommodations reserved we decided to take our chances and pack our bags with enough stuff to spend the night if we happened to find a place. We wound up lucking out and found a rental house for the night set back in the dunes just outside the center of town. The thing about Cabo Polonia is there is no electricity in the town, so accommodations are rustic, equipped only with candles for light and a bucket and well for water. I realize this description sounds like a nightmare for many, but there is a certain appeal being on the beach when the sun goes down and the only light you see are homemade lanterns illuminating the few resturaunts and bars that stay open.

The town, a designated national park, is populated with a artists, writers, and hippies mostly, but during the day there is a heady influx of tourists, many of whom hale from Argentina and Brazil. After we settled into our shack, we strolled into town and grabbed lunch at a cute little hut of a resturaunt where I tried my first Chivito; a steak sandwhich topped with a fried egg, peppers, ham, cheese, and mayonnaise, essentially a heart attack on roll.

After having entirely too much beer with lunch we stumbled our way down to the light house which is surrounded by a jettison of rocks inhabited by the world's second largest sea lion colony. Across the way sits an island that is also inhabited by sea lions. We learned later that day that the male sea lions compete for the females and those who lose are cast off to the rocks by the lighthouse. 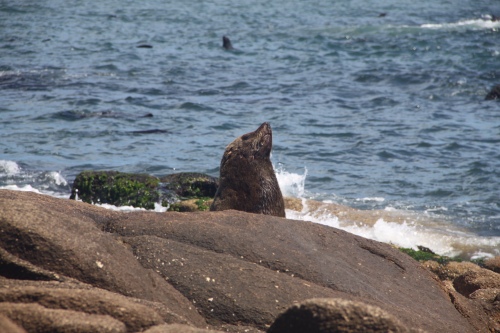 From the lighthouse we made our way to the beach for a late afternoon Siesta. The beach at Cabo Polonia is charming and not too crowded this time of the day as most tourists were already heading back to their cars.

After resting on the beach we rented horses from a local who took us for a leisurely ride along the beach and up into the dunes. 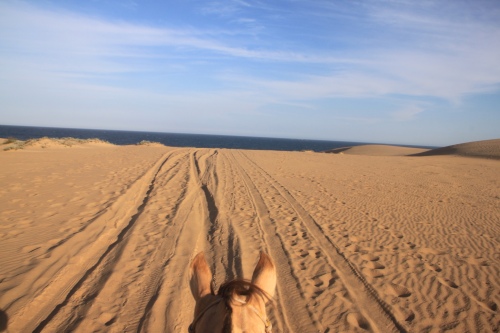 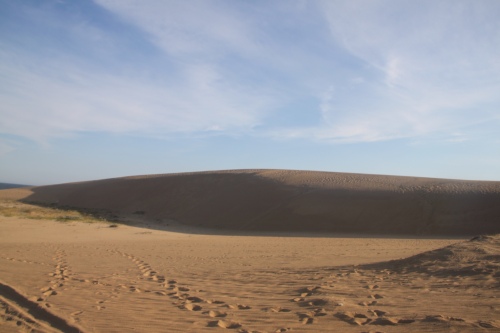 That night, we watched from the house as the sun illuminated the sky with a pinkish orange and waited for the nighttime. Using a headlamp, we hiked our way to a resturaunt turned bar for some pizza and wine. I've stayed in many interesting places around the world, but nothing as magically unique as Cabo Polonia.

After a surprisingly restful night of sleep, we made our way back to our car which didn't start because we left the lights on the day before…oops. Fortunately Michelle was able to get a few guys to help us jump the car; I have to say the people of Uruguay are among the friendliest I have encountered in the world.

With a late jump on the road, we headed to Punta Del Diablo, which translates as Devil's point…..comforting. As the skies turned a dark gray and the clouds roled in from every direction, we found ourselves driving through a severe storm with crashing thunders, lightning, and monsoon like rain. When we finally arrived in the town, we found a cabana to rent from a nice guy named Walter. After refreshing up, we went to grab a bite to eat being there wasn't much else to do with the clouds looming over head. We both wanted Milanesa, a fried steak smothered with ham, mozzarella, and tomato sauce served usually with papas fritas. We ordered a portion for two people, which,when it arrived was the size of a small cow. Accompanied with a liter of Patricia, the local beer, we managed to eat the whole delicious thing. 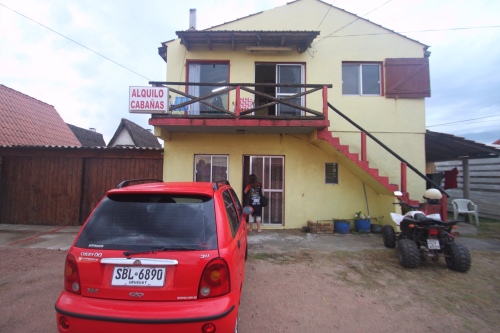 After a rainy night, we awoke at 8, early for Uruguayan standards, and watched the town slowly come to life as we walked to the beach. Punta Del Diablo used to be a little fishing village, but has recently turned into a popular tourist destination for Brazilans in particular, sprinkled with artisan stores and decent cafés and restaurants. Even in inclement weather, it is hard not to be charmed by this seaside town. 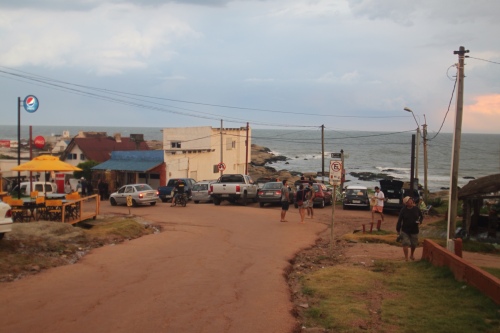