Our last few days in Japan were very hectic, traveling from Hiroshima to Tokyo for one short night, then down to Fukushima for a night, then back to Tokyo for the last two nights. Exhausted, we hopped on and off of trains and buses, experiencing some highpoints,as well as some lowpoints along the way.

Arriving back in Tokyo from Hiroshima, we were a little thrown off when we could not yet check into our hotel and had to head out to another spot for our debrief. Right from there, we made our way to Tokyo Dome to experience first hand the cultural phenomenon that is Japanese baseball.

Walking into the stadium, we got caught up in the sound of loud cheering and organized chanting of the fans that permeated throughout the dome.

Throughout the game, there was all sorts of entertainment to accompany the actual baseball game. My favorite was the below race which took place in the middle of the 7th inning.

After the Giants came back from a 3-0 deficit to finally win the game in the 12th inning, the place went crazy!!

With only a few hours of sleep in us, we headed out to the train station at 6:45 the next morning to visit Fukushima; the prefecture that was devestated in March 2011 by the triple disaster; earthquake, tsunami, and the destruction of the nuclear reactor.

Because of the perceived potential risks of visiting this section of Japan, this part of the tour was optional. All but two of us had decided (before leaving NY) that we would go, but I have to be honest, I was very apprehensive about this part of the trip, and in that moment, somewhat regretted my decision to go.

When we arrived in Fukushima, we were greeted at the train station by the Fukushima Internatiional Association, hurried off to the hotel to drop off our bags before we took off for a whirlwind tour through various towns of Fukushima prefecture.

Our first stop was at an elementary school, where we were treated to a 14 song concert given by the children. 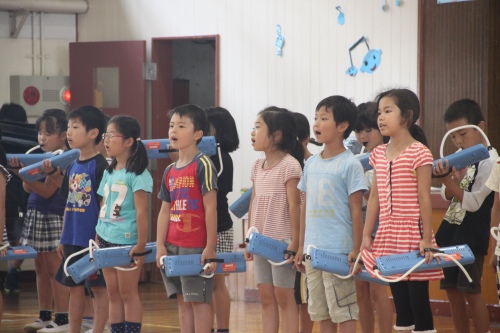 Afte the concert, we were informed we would be eating a school lunch again with the students in the classroom, only this time there was a concerning twist, (well for some of us). We were instructed that all the school food was locally sourced and produced, and therefore, the radiation levels of the food needed to be checked.

The school also checks the radiation levels on the school grounds using the device below.

We were informed that .3 was considered the danger level, and that in fact, the school was operating well below the danger level. In essence, one is exposed to the same amount of radiation or more when flying in an airplaine (due to the atmosphere), as when we were in this part of Fukushima.

After the school visit, we were taken to visit a temporary housing development where we thought we would have the opportunity to chat with those who lost their homes and in some cases, livelihoods as a result of the earthquake/tsunami. When we walked in however, after initial confusion and some slight chaos, we were directed to have a seat on the floor when we were greeted by a volunteer who made small talk with us, while Jeff and Kazuko deciphered what was going on. Then, we were introduced to a Rwanda survivor, who now lives in Japan. She had originally taught in Japan years before the genocide in Rwanda, so in 1994, when she was living like a refuge in the Congo as a result of the events taking place in Rwanda, her Japanese host family from years earlier helped to bring her to Japan. She now works to help those who were living as refuges in Japan. To be honest, the whole thing was rather confusing.

Afterwards, we were taken to a room where we had coffee and cake with some displaced peoples, most of whom were eldery women. There was little explanation, and I think we were all a little perplexed when the women started breaking out into different songs- all of which were sing-a-longs. At this point, whether it was due to exhaustion, confusion, or both, many of us were feeling a little frustrated. We felt as if we put ourselves at risk to come and visit this part of Japan (real or percieved), and we were not quite sure what the point of all this was and felt as if, perhaps we were part of a public relations campaign, rather than genuinely learning about the effects of the triple tragedy. So much so, I originally wanted to call this post WTF – What the Fukushima?! But realized that this might not be the most sensitive title when dealing with the subject. Thankfully, that evening we were invited to have dinner with a local English speaking club, and had what I think was one of the best meals of the trip, also with the best company. Definite highpoint.

The next day in Fukushia, while I was still freaked out and frustrated, did prove to be much more informational and, in terms of truly seeing the impact of the triple tragedy on the people in this part of Japan, it was an invaluable experience.
DInner with Kencho ESS

Our second day in Fukushima started off with an early morning bus tour, about two hours out to the shoreline to survey the damage. Along the way, we saw a memorial listing the names of those who had perished on March 11.

We were then taken to a Solar Power Energy Center, where again, the context of what we were doing there was lost on me a bit, but the general idea is that now, due to the negative sentiment towards nuclear energy, Japan is looking for energy solutions, much like the rest of the world. Here, after a brief presentation explaining solar power and how this center educates children throughout Japan, we had what might be the strangest food we've eaten in Japan yet. They gave us organically grown lettuce (grown in greenhouse, not earth), with bacon and bread. It was actually quite good.

The sun came out for lunch, but quickly dissipated as we set foot back on the bus and headed to a part of Fukushima that is off limits to the general public and still uninhabitable. We were given a special permit to tour this area. Again, I was a little apprehensive about spending so much time here, but in retrospect, I realize the value of being able to see such things first hand. The devestation and destructoin that still exists three years later should be a reminder to all that Japan still greatly needs the help of organizations and philanthropers around the world, and should also serve as a warning for disaster preparedeness in the future. The pictures below are just some example of the carnage and destruction we saw in those couple of hours. 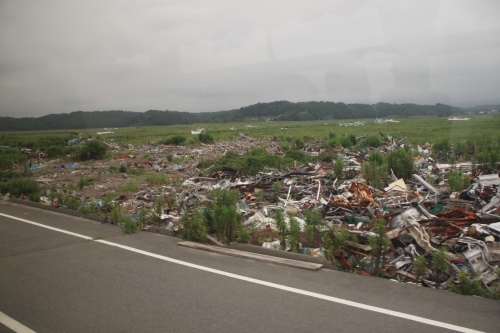 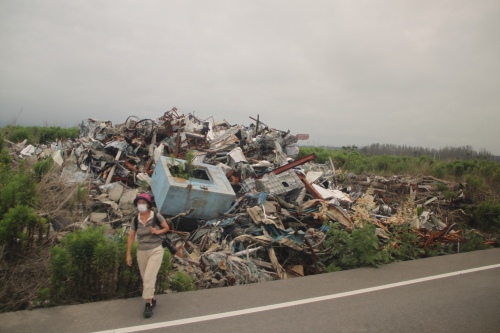 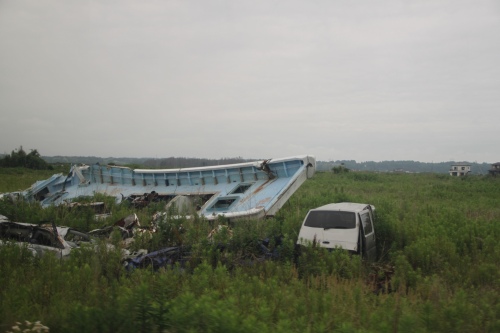 After a long train ride back to Tokyo that evening, we all kind of settled into the hotel and started thinking about going home. We had only one day left in Tokyo- half of which we were scheduled to spend giving feedback and debriefing our experiences.

The next morning, we had our debrief session, and tried to make it a little fun by giving superlatives to everyone in the group. Afterwards, everyone kind of went there seperate ways to get in some last minute shopping or sight seeing. That evening, four of us had the good fortune of being granted Kabuki tickets, and headed out to the theater around 3pm. The lower level of the theater is filled with all sorts of souvenir and gift stores, along with little food vendors selling baked goods, bento boxes, and dumplings. We got some last minute shopping in, grabbed some food to go, and picked up two bottles of wine and some cups to go enjoy during the show. In Japan, it is customary to bring in your own food and drink to the theater.

The experience of the show was interesting, with many of the audience dosing off within the first 15 minutes of the performance, and long pauses of silences, followed by echoing laughter. The best way I could desribe it is as if Broadway and Opera had a lovechild.

Overall, being a part of the Japan Society's Educators Study Tour gave me the opportunity to do and see many things I would never have been able to do if visiting Japan on my own. Sharing a meal with A-bomb survivors, feeling part of the Wakayama community, meeting the awesome Sakurai family in Obu, chatting with students about peace education and nuclear energy at school, and making some new friends and memories along the way; these are my highpoints.