5 days, 5 parks, 1 sweatshirt. Perhaps I should have checked the weather more closely before I left. Heading out to the great Southwest, the plan was to spend 5 nights/6 days exploring as much of Utah's National Parks as we could in the short amount of time we had alotted for ourselves. I had read many people's itineraries and suggestions before I left, claiming it was impossible to “do it all” in such a short amount of time. By the end of the trip however, we were able to adequately explore 3 of the 5 parks, hiked over 30 miles, and got to enjoy some of the interesting and breath-taking scenery along route 89 and route 12, before driving back through the Wasatch Mountain Range, to fly home from Salt Lake City.

The trip got off to a rocky start, as the night before I was hunched over in pain, with some sort of abdominal aching of the likes I have never experienced before. Not wanting to risk having something seriously wrong with me and being stuck in the wilderness, I drove myself to the ER and spent the entire evening there. After some tests and a CAT scan to rule out any obstruction or apendicitis, I was released about an hour before we had to catch a 530 am train to JFK. Arriving in Las Vegas, and picking up our VW Beetle, I didn't feel much better than the night before, and remained in a miserable state of pain and worry the entire drive to Zion. Yet, when we finally pulled into Springsdale, where our hotel was located just outside the park, I started to feel a bit of relief (or so I thought). 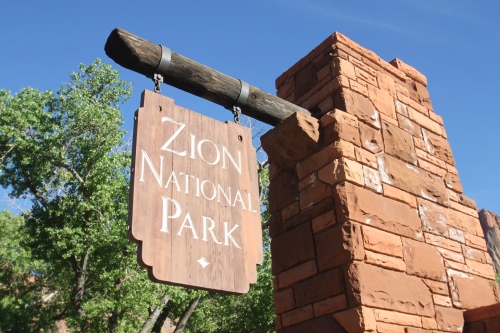 We quickly checked into the hotel, looked over a map of the hiking trails, and caught the shuttle bus into the park. With the late hour upon us, we decided to do the Emerald Pool trail, which brings you to 3 separate, green-tinted pools of water, along a trail boasting much of the parks wildflowers.

After hiking out to the main road via The Grotto trail, my stomache was acting up again, so we headed back to the hotel. We decided to grab a quick bite to eat at Jack's Sports Grill, though I felt like I could barely keep anything down. Although I hoped to feel better, I planned to sit the next day out and relax in the hotel.

Fortunately for me, the shuttle bus into the park does not start running until 8am, so when Michelle asked if I could drop her off at the Angel's Landing trailhead early in the morning, I changed my mind and decided to give it a try. Angel's landing is perhaps the best known, and most demanding hike inside Zion, with a verdigo inducing climb at the end, treating climbers to a panoramic view of the entire canyon. As I began to hike, and as the day went on, I began to feel much better and finally started to enjoy the scenery.

I made it as far as Scout's landing, where my fear of heights and sense of self limits kicked in and said “That's enough, don't push it.” (But mostly, it was my fear of height). If you look to the left of the picture below, you will see hikers (including Michelle) scrambling up narrow rocks, holding on to a linked chain in their effort to reach the real summit, with a 4,000 ft drop off on both sides! I was perfectly happy with the view from Scout's Landing.

After an afternoon snack of PBJ, we took the shuttle up the the Temple of Sinawava to hike the Riverwalk down to the Narrows. Not fully prepared (as usual), we did not realize we could have rented water gear to actually hike through the Narrows. Still, we waded across the freezing water a bit, and hiked a little down the river that flows through the two granite walls rising up on each side of us. The best part?..Michelle being reprimanded by a 10 year old who scoldingly looked her up and down while asking “where are your shoes?!?!” Afterwards, he shook his head in disgust, and walked off.

That evening, we grabbed a pretty terrible pizza from Pizza and Noodle, before heading back into the park to catch the sunset colors reflected on The Great Arch.

Woke up before the sun was out, feeling so much better and genuinely loving life. (It's amazing how feeling sick can put things in perspective for you). We grabbed breakfast at the hotel, packed up the car, then drove through the east side of Zion, as the sun's spectacular colors rose up over the canyon. We headed east on route 9 (Zion-Mt. Carmel Highway), through the Zion-Mt. Carmel tunnel built in the 1920s. We continued until we reached the junction with route 89 North, where we stopped off to fill up on gas and grab some souvenirs. From here, we continued east on route 12, arriving in Red Canyon, part of Dixie National Forest.

We finally arrived in Bryce around 11am, where we checked in with the lodge to make sure our room was confirmed. Having to wait until 4pm to check in, we headed out for a “figure 8” hike, combining 3 loop trails in the park; Navajo, Peakaboo, and Queen's Garden. First approaching the rim of Bryce Canyon, I was awestruck at the number of colorfull, red hoodoos, some still covered in snow.

Hiking down into the hoodoos however, gave me a totally different perspective, ranking this as one of my all time favorite hikes.

After making our way back to the rim at Sunrise Point, we settled into our room at the historic Bryce Canyon Lodge, then made our way to Bryce Point to catch the sunset, while enjoying a Hoodoo Beer. 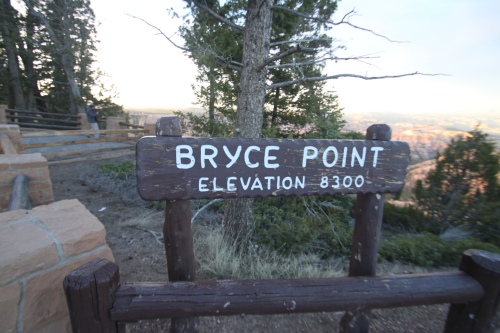 Capping off the day, we took the suggestion of a park ranger, and headed 7 miles out of the park to Bryce Canyon Pines, a little place dating back to the 1930s, that serves homecooked meals, famous for it's pies and soups. A perfect ending to a perfect day.