I cannot even begin to describe how amazing this place is. If you are even remotely considering coming to Myanmar, do it now, because once this gem of a city becomes well known, it is sure to be over-run with tourists.

After a bumpy flight, we landed in Bagan around 8 in the morning and headed to the Hotel Blazing in the adjacent town of Nyaung U, where we would be spending the next three nights. After a brief morning nap to make up for getting up way too early for our flight, we decided to rent e-bikes from the hotel and head out to explore the many temples of Bagan.

Set along the Ayerarwady River, Bagan dates back to the 11th century. The area, known officially as the Bagan Archeological Zone, is dotted with over two thousand temples and stupas, some of which are still in use. With no real plan, we set out on our vespas towards, what we later learned, is the central plain of Bagan. As we rode along the paved road, we came across numerous dirt paths that led inwards towards clusters of temples. We stopped off at the first one we saw, parked our bikes, and were immediately greeted by an elderly burmese woman who unlocked the temple gate for us. When we walked inside, we were greeted by a giant buddha statue surrounded by faint remnants of frescos of tiny Buddhas. We could not believe there was no one else there with us. We would soon learn however, that this is the case in many of the lesser known temples throughout Bagan. 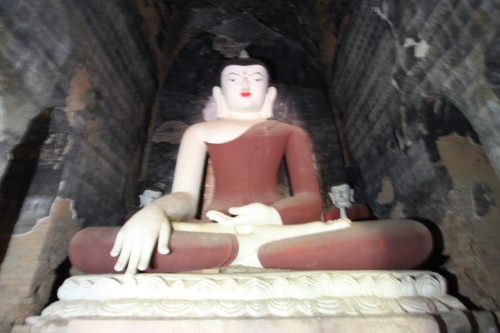 From here, we headed a bit further down the road, exploring some more temples before we decided to pull into a roadside cafe seated next to one of the few, remaining working temples. We had planned to just order some Cokes to jolt up on caffeine, but the people were so nice, we decided to eat lunch there as well; a delicious meal of fried noodles, chicken and egg.

Upon leaving, the woman asked if we would be back tomorrow, to which we replied “maybe”, fairly certain we would not be heading back that way. We would be wrong.

After lunch, we rode further down the road to Ananda Paya, another Pagoda located in the Central Plain. A little more touristy (as in there were about 20 westerners sharing the temple with us), this is the first time we came across people hawking souvenirs. Unlike when visting other countries in Asia, when we expressed no interest in buying anything, they politiely said thank you and good bye, without harassment. Which of course, led us to buying many more souvenirs than we had planned.

This gem of early Bagan architecture is considered one of the most beautiful of all of Bagan’s temples. There are four entrances to the temple, each which lead to four enormous Buddhas, which are protected by guards on each side.

From here, we continued down the road to Thatbyinnyu Phaya; another impressive temple that dominates the skyline of Old Bagan. 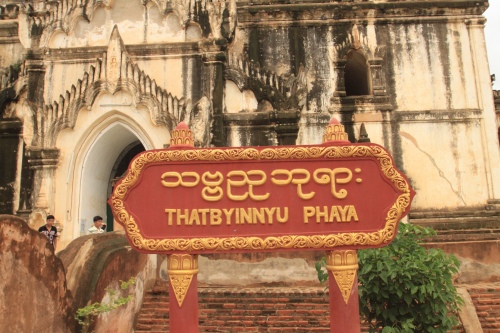 From here we explored the surrounding area, where there are numerous temples you can climb to the top of and get a better view of Thatbyinnyu Paya. Our favorite was a smaller temple to the right of it, where we were greeted by some persistent kids who wound up giving us a tour of the place. We happily6 agreed to let them “show us around” and bought postcards from them when we were done, and souvenirs from one of the boy’s mother and baby sister. He spoke excellent English and assured us that because it was a weekend he was at the temple with his mother, but during the week he goes to school. We hopefully believed him. Upon hearing we were from America, both boys enthusiastically responded “Oh..Obama City!!”- which was the welcoming reply we would here for the next few days. From the top of the temple, we had great views of the surrounding area.

The rest of the day consisted of a few more explored temples before we headed our way back to Ngaung U. To be honest, after a while, we lost track of many of the temples’ names, but never took them for granted. You could visit over a hundred temples in Bagan and never find yourself underwhelmed. 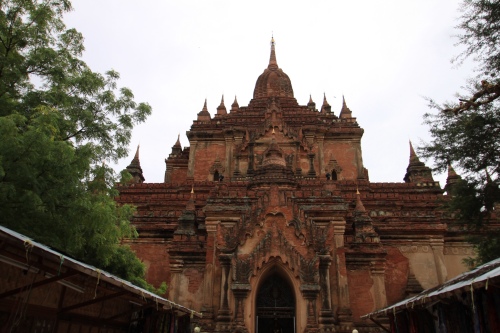 In the evening, we knocked around town a bit, before grabbing dinner at a little cafe called Weather Spoons. 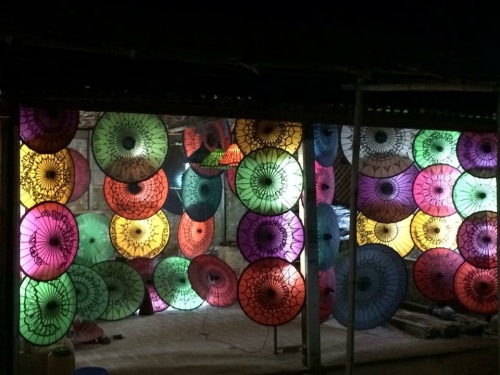 On our second day in Bagan, we headed to the Shwezigon Pagoda, a working temple that is actually in the town of Ngaung U. We entered the temple through the south entrance where we were accosted by the most agressive souvenir peddlers we had yet to come across. Once inside the temple however, it was serene and peaceful.

Until we came across this, which freaked us out a bit. 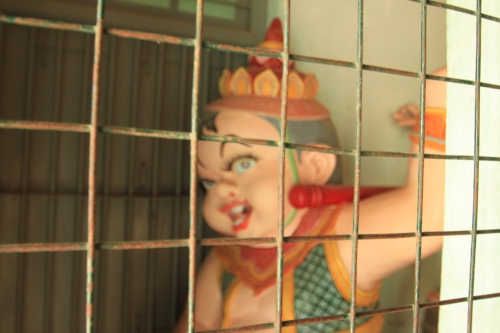 As the afternoon progressed, the rain started to really pick up, and we found ourselves back at the temple with our lunch hosts from day one. As we pulled in with our bikes, and I attempted to break, I lost control and the bike kept going, flinging me off the side as it headed towards a parked car. Thankfully, both me and the bike wound up in a pool of mud. Immediately, our lunch hosts came running out to offer assistance and help clean me off. As they pulled me up from the mud, I couldn’t help but wonder if, in that moment, they regretted inviting us back the day before.

After lunch, we went exploring a few more temples, and came across two burmese boys whose motor bike clearly was either out of gas or electricity. We looped back around, imagining ourselves to be some sort of post-modern version of CHIPS, and scooted up to their side offering our assistance. I’m not sure if they were mortified, scared, or just plain, amused, but their facial expressions were more than enough to convey that they were okay, and certainly were not going to accept assistance from two western woman; one of whom was covered in mud.

Our third day in Bagan was also an amazing day. We awoke early to catch a shared cab ride toTaung Kolat, which on a clear day provides you an expansive view of the surrounding country side, including Mt. Popa. The mountain is said to house certain spirits, referred to as nats, which many worshippers come to pay their respects to. It was dark and cloudy like every other day we’ve been here, but still a very interesting temple to check out, with the added bonus, of course, of watching Michelle step in monkey shit on the way up. We also met some very friendly locals at the top of the mountain who wanted us to take pictures with their baby, though I’m not sure she was as into it as her parents.

That afternoon we rented bikes again and headed to see the Shwezendaw temple, which perhaps offers the best panoramic views in all of Bagan.

Once at the top, we came across some pretty foolhardy tourists who though standing on wet stone pillars at the top of the temple was a good idea.
In addition to these idiots, we thankfully also came across some wonderful and friendly tourists, as well as some young Buddhist monks who we briefly befriended. 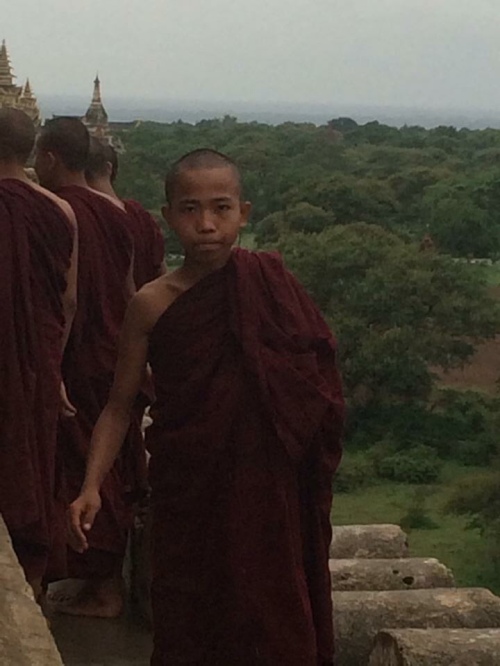 Bagan is one of those few, wonderous places left in the world where you really feel like you have completely stepped back in time. It is easy to see how in a few years, this area can easily become overrun with tourists. In some of the temples, you can already see it starting to happen. In fact, due to its status as a UNESCO World Heritage site, in the 1980s, the residents of Old Bagan were removed from their homes, and forced to relocate to, what is now, New Bagan. Rather than preserving the site however, where their homes were, are now high-end hotels, some of which sit right on top of the temples. As Myanmar continues to open up to the western world, one can only wonder what will become of this magical and beautiful place.