These nine words, uttered by Keiko Ogura, the director for Hiroshima Interpreters for Peace (HIP), helps to illuminate the incredible efforts that many Hibakusha (survivors of the A-bomb) take to promote a peaceful, nuclear free future.

After traveling to Hiroshima last summer with the Japan Society, and brining my students to hear two survivors speak, along with Harry Truman’s Grandson Clifford, this past year, I knew I needed to be here for the 70th anniversary of the bombing. With all hotels and accomodations booked up at least a year in advance, I luckily found a tiny apartment for rent on airbnb, walking distance to the Peace Park.

After running through the airport to catch our plane in Taiwan, we landed in Hiroshima early in the afternoon on August 5th, a day before the anniversary. We quickly dropped off our bags and made our way down towards the Peace Park, where there was an incredible energy felt through the air. Entering near the A-bomb dome, we were inmediately approaced by eager and friendly school children who enthusiastically asked us to sign their petition to end nuclear weapons. We no sooner walked about 15 feet, when another young Japanese student wanted to ask us a few questions for a research project he was conducting. Over the next day and half, we were probably interviewed at least 7 times between the two of us.

As we made our way towards the Hiroshima Peace Memorial Musuem, we came across a variety of activities throughout the park, most of which were promoting peace and the elimination of nuclear weapons throughout the world. 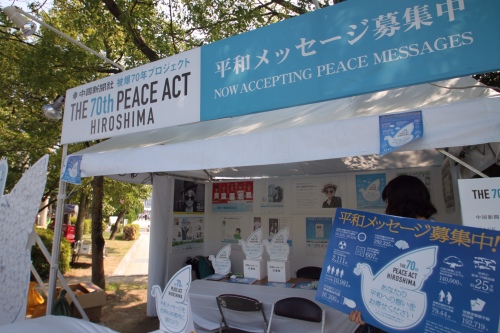 As a teacher, what really struck me were the number of children and school groups involved in these activities.

One of the more moving things we came across were volunteers reading aloud Sadako Sasaki’s famous paper crane story, next to the Children’s Memorial, with faint violin music as background.

Closer to the museum, we passed the Centotaph, which had a line of people waiting to say a prayer, and which was covered with flowers from those who had come to pay their respects. Looking through the Centotaph, we could see the flame of peace, which will remain lit until all nuclear weapons are destroyed. 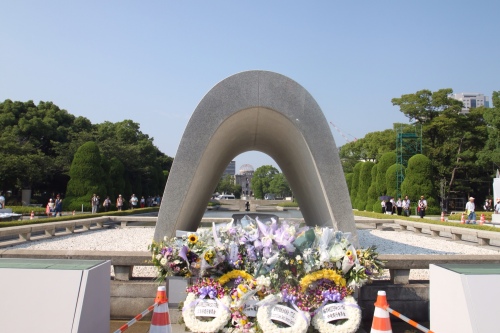 That evening, while we were crossing the bridge, we got caught up in a protest for peace led by a local Catholic Church. With smiles and music, they marched through the streets of Hiroshima happily spreading their message of peace. We happily joined them. 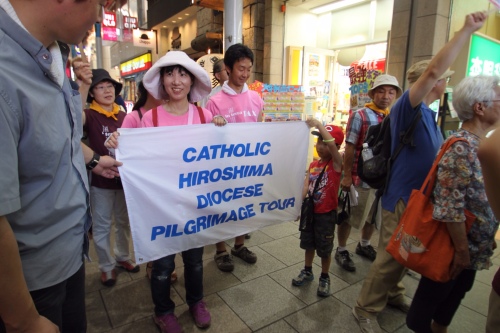 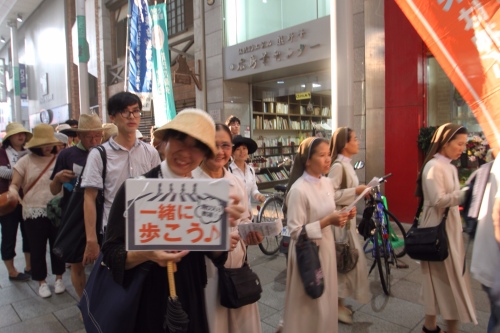 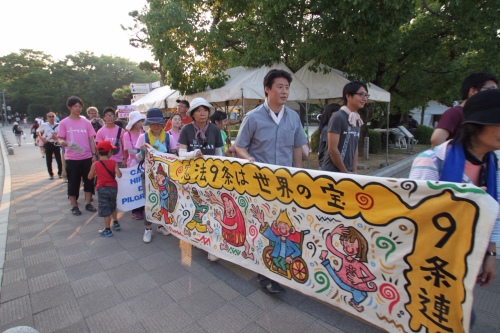 Back at the Peace Park, we gladly obliged when we were asked if we would be willing to write a message of peace to be hung on an illuninated peace tree that was temporarily being placed in the park. 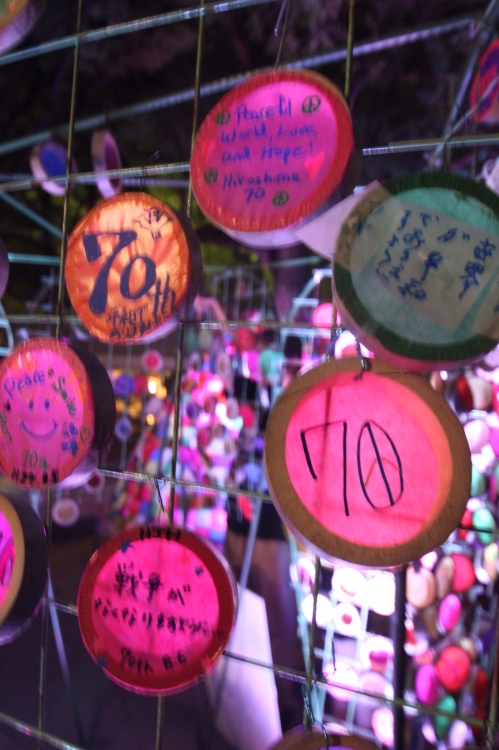 On the day of August 6th, we woke up extremely early so we could be at the park by 6am. As we approached the A-bomb dome, we saw crowds of people descending onto the park, yet nobody was in a rush or pushing people. Just another example of the ordiliness and politiness with which the Japanese consistently carry themselves. We quickly, though not aggressively, walked to the other end of the park, where we found seats under the giant white tents set up for the official commemoration ceremony to take place at 8am. 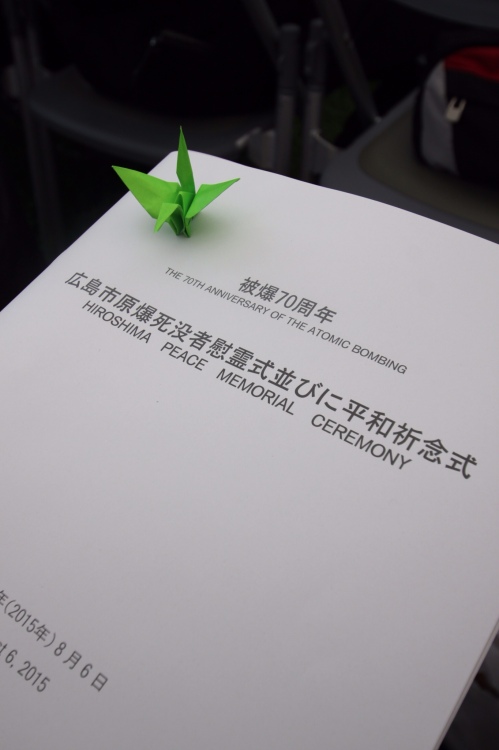 Although we saw Caroline Kennedy and Japanese Prime Minister Abe dart quickly by, I was much more impressed with the Japanese people with whom we were sitting. With the temperature nearing almost 100 degrees, these people were decked out in fancy clothing, and not one person was rude or disrespectful in the crowds of people trying to find seats. Obviously being too far away to really see the events unfold, the Japanese man sitting to our left allowed us to watch the live stream on his phone with him.

After the ceremony, there were numerous events schedule throughout the day, including being able to listen to three survivors give their testimony, as well as participate in a reading of written testimonies of survivors who are no longer with us. 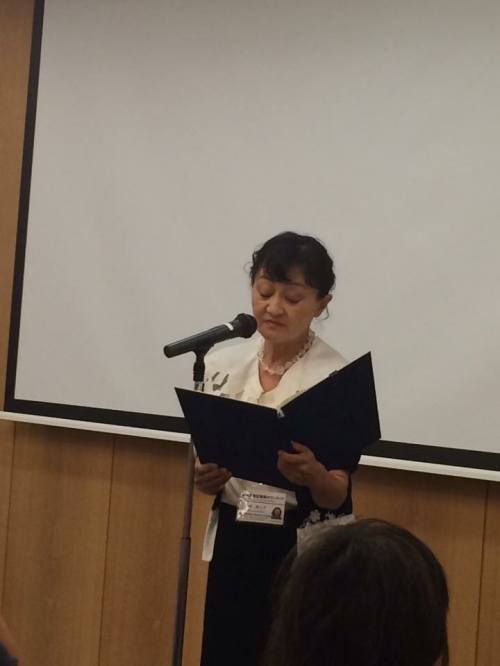 Much like the day before, the park was filled with friendly and energetic people of all ages promoting love and peace. After listening to survivors speak, then walking out to the park to be greeted by smiling children offering free hugs, our emotions were on a rollercoaster all day. 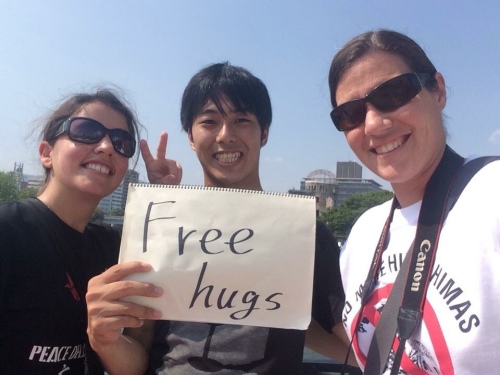 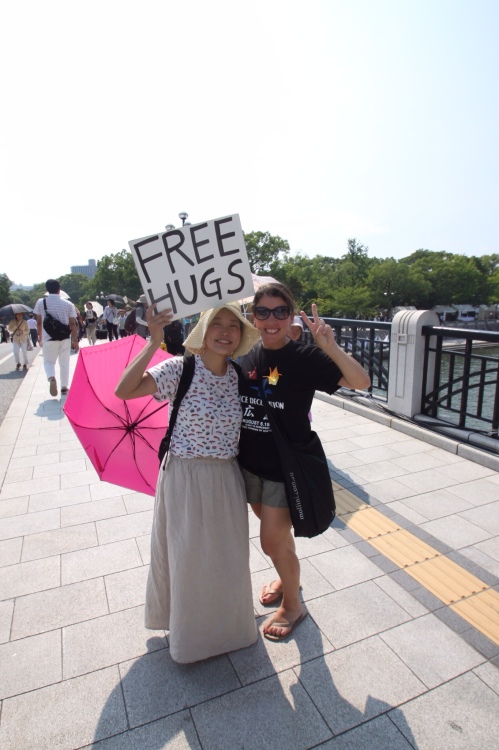 On the anniversary of the bombing each year, the city of Hiroshima hosts a paper lantern ceremony, where individuals can write a message of peace on colored paper, then that evening, bring it to the waterfront where they are given a wooden frame to wrap their message around, and send it down the river. 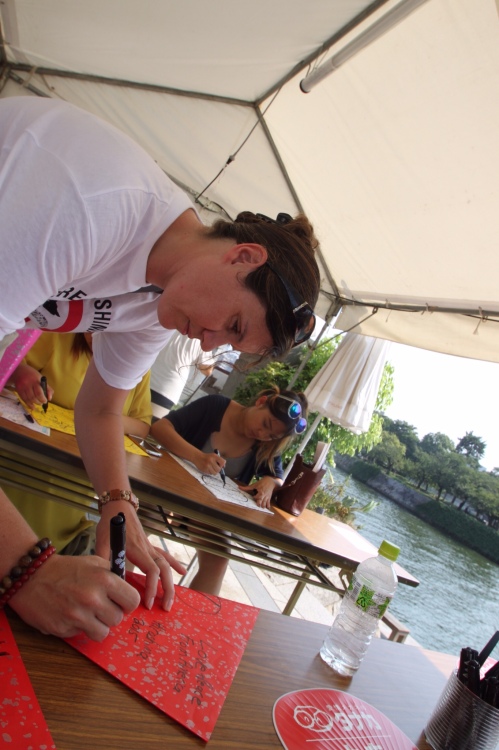 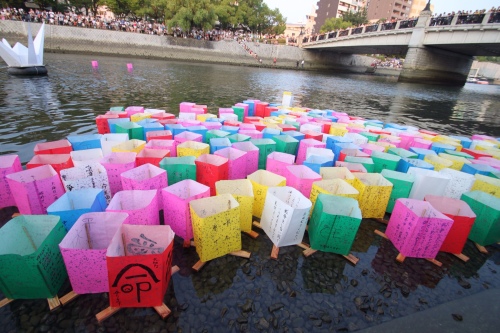 That evening, we sat by the riverside after releasing our lanterns, and watched as over 12,000 lanterns floated past us, with the ghostly reflection of the A-bomb dome rippling across from us, as a children’s orchestra played hauntingly beautiful music all night long. 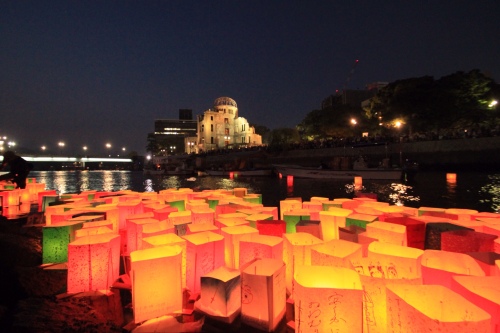 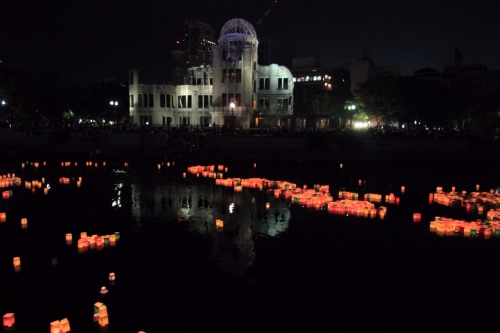 It was undoubtedly, one of the most beautiful things I have ever experienced.

Today, we are in Nagasaki, on August 9th- the 70th anniversary of the bombing here. While there are still peace activities going on, and the city has dedicated itself to promoting peace and banning nuclear weapons throughout the world, there is a profound difference in the feel of the city today than there was in Hiroshima. I don’t know why, but it feels a bit more solemn. Perhaps because of those killed by the bomb in Nagasaki, 70% of them were women, children, and senior citizens.

After arriving last night, we made our way to the A-Bomb Memorial Museum, which in my opinion, is much darker than the one in Hiroshima, although both, rather bravely, acknowledge Japan’s role as an aggressor nation leading up to the war. In the evening, we wandered around the hypocenter; a part of the peace park that is sprinkled with constant reminders of where the ground level was before the bombing. Ironically, on the morning of the bombing, “Fat Boy” came down on, what was at the time, the largest Christian Church in Asia. Today, a piece of the church sits in the park, and last night there was a beautiful ceremony taking place, where an older Japanese man eagerly asked us to come “pray with us.” Due to its earlier importance as a trading post, and the Dutch influence, Nagasaki has a very large Christian population compared to the rest of Japan. 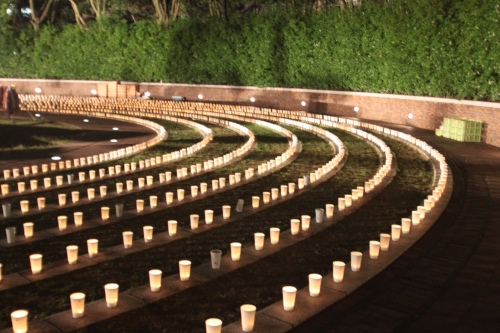 This morning, we went back to the Peace Park and attended the official ceremony commemorating the victims. The ceremony opened with a chorus of A-bomb survivors singing, and also included a peace pledge from Sumiteru Taniguchi; a Hibakusha who pleaded with us to continue to fight for a nuclear free world, and somewhat scolded the proposed amendment to Japan’s constitution that would allow them to create an army once again. After the ceremony, we explored the peace park some more, than visited the Hall of Victims, where all the names are listed of those who died that day. Another incredibly moving and emotional day. 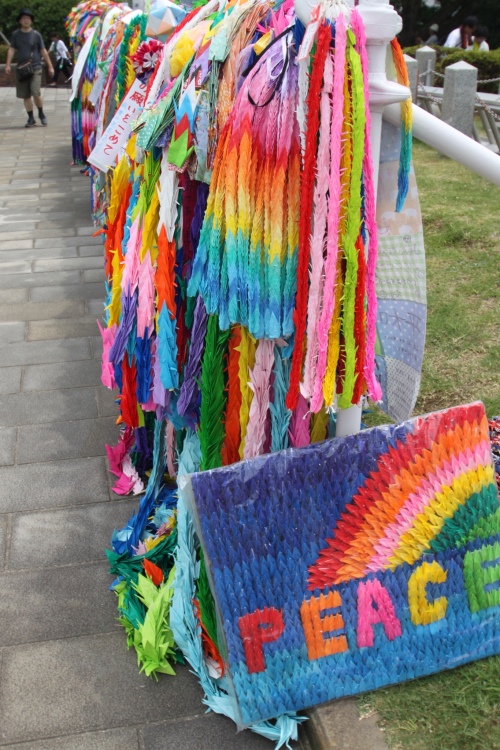 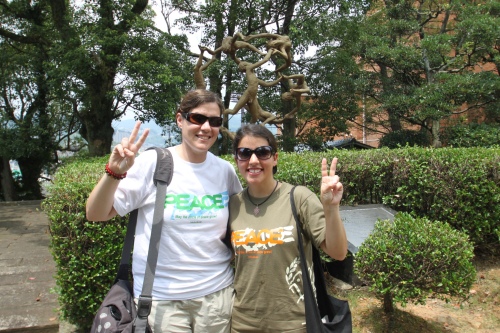 So, as these survivors painfully tell us their stories, let’s be sure to tell them to generations to come, so that no one will ever have to suffer again, like the people of Hiroshima or Nagasaki have.