Arriving in the Belizean jungle after a long day of travel with the not-so hospitable American Airlines was a pleasant departure from the real world, and the perfect way to begin the summer after a very long, and very hard school year.  After checking into Table Rock; a quiant eco-lodge perched in the hills above San Ignacio, we happily accepted our welcome drinks made of the local Traveller’s Rum, Orange Juice, and Lime.  With a few hours left in the day, we decide to hike down to the Macal River (which sits at the bottom of the resort) and go tubing downstream a bit.  Although the Macal is a vital river to the region, tubing wasn’t quite how we pictured it.  We hopped in our tubes and waded out to the center of the river to catch the current.  Problem is, the current was moving slower than the last week of school and we weren’t going anywhere, in fact, we may have been going backwards.  After what seemed like an eternity, and much struggling and akward paddling, we finally made it the the area just before the rapids where we could put in our tubes, and hike back up to the lodge along the River Trail.

Our second day in the jungle was one of the most amazing experiences I have ever had.  After breakfast at the lodge, made of local granola and yogurt, we were picked up by our guide for the day, Patrick.  We drove about an hour and a half before we arrived at the entrance of the ATM Cave; the Cave of the Crystal Maiden.  First discovered in 1991 by an English archeologist, the cave is considered to be the most sacred cave in the world and provided the proof many archeologists and historians needed to prove that the Mayans did indeed, engage in blood and human sacrifices before they eventually died off.  Unfortunately, in 2012 a French tourist dropped his camera and broke the skull of one of the human remains, leading to the banning of any photography from the Cave. Any pictures I have included here of the cave are from the Belizean tourism page.

When we arrived at the Cave, our guide advised us to get dressed into clothes that could get wet and to be sure to use the bathroom because this was the last one we would see for 5 hours.  We walked up a little pathway from the parking lot to face Roaring Creek, which we had to swim over 50 ft to get across.  Okay!  Right out of the gate, this was an adventure.  From here we hiked about 45 minutes into the jungle until we came to a picnic area where we were given headlamps for the cave and told to leave our lone water bottles in a place we could identify when we came out.  We walked over to the entrance, and slowly climbed down a jagged stairway of rocks, covered with slippery algea.  Once at the bottom, fully inside the cave, we had to swim across a 20ft pool before we reached a patch of dry land.  After spelunking, climbing, and swimming through some more of the cave, we arrived in the lower chamber where we saw the first of many artifacts and human remains.

Around 750 AD, the big Mayan cities like Chichen Itza, Tikal, Caracol, etc were all expanding their empires, building more and more temples and complexes.  What was needed for the temples was wood and stone, and thus there were massive amounts of trees cut down from the surrounding jungle.  Without the trees, there was not enough condensation to produce rain, henceforth causing a massive draught and famine.  In an effort to fix this problem and appeal to the Gods, the Mayans used these caves to bring offering of corn and other items to the Gods.  They believed that the caves were a channel to the underworld and henceforth, would bring offerings in the hopes of appeasing the Gods to fix their problems.  As we hiked through the cave, we came across numerous clay pots and human bones calcified into the ground.

Making our way further into the cave, we came across our first sightings of humans remains; calcified bones that served as proof for archeologists that the Mayans did indeed engage in human sacrificing.  It wasn’t until 1991, when this cave was officially discovered, that archeologists could prove their theory that the Mayans participated in human sacrifice.  By 850 AD, when the draught and famine still had not subsided, the Mayans resorted to offering up the blood of humans, presented in clay vessels, also left in remnants throughout the middle of the cave.   About another mile in, we were told to take off our shoes and put on socks as we climbed up a jagged hill of rocks to enter the ceremonial chamber where a fully intact human skeleton remains. The highlight of the cave, the crystal maiden, called that because she is crystallized into the ground, serves as evidence that by 950AD, the Mayans, desperate to relieve their problems, turned to full human sacrifice.

The way out of the cave was just as fun as the way in, wading through water and climbing rocks to get out.  Once we got back to the lodge, we dropped off our bags and headed down to the river to take out one of the canoes.  Although I am an avid kayaker, canoeing is a whole different ball game, especially when you are paddling upstream agains the current.  Our goal was to get to Cha Cha Creek; a resort spa that has a partnership with Table Rock to use their facilities.  Once we finally figured out how to paddle without turning the boat in circles, we realized we had no idea where the Cha Cha Creek Lodge was, and weren’t sure how far we had to go or if we had passed it.  Alas! We finally saw another canoe tied up on the river bank and figured we must be close, but before we could get to that we had to get past a little rapid that would push us backwards even as we paddled with all our strength.  We tried to go over to the left of the current and it still pushed us down river.  When we tried to go to the right of it, it almost flipped our boat and next thing we knew, were were stuck in a tree.  After much panic and laughter, Michelle decided to hop out of the canoe and bravely place her feet into the chocolatley looking river, and pulled us out.

When we finally reached Cha Cha Creek, we tied up the canoe and began to hike up the path, looking forward to enjoying a drink at their bar or perhaps a dip in their infinity pool.  About half way up the path however, we came across a washed out bridge and could not go any further.

Confused and disappointed, we debated whether or not we should find another route to the lodge or head back to ours.  Suddenly, we heard a grumbling howl coming from the trees far off and decided it was best to head back before it got dark.  Back at Table Rock Lodge, we stopped off at the bar for some of Cassie’s delightful creations; a well earned drink after a long day of swimming, climbing, and hiking. We also learned, that instead of the Jaguar we anticipated, the roar came from the local Howler monkeys that make a roar if you invade their territory.  Perhaps they were the ones who knocked out the bridge:)

Our second full day in the jungle, we were picked up at 7am and headed off to the Guatemalan border to visit Tikal National Park.  Considered to be the best Mayan ruins in Central America, Tikal was the site of an ancient Mayan civilization that was abandoned around 950AD.  The site, 85% of which is still being excavated, sits in the middle of the Peten jungle, just over the border from Belize.  After about a 2 hour ride to get there, we hiked into Complex Q where there are two twin pyramids that sit perfectly across from one another and believed to be the site of celebrations for cyclical events.

From here we hiked into the Great Plaza, the center of Tikal where Mayan ceremonies still take place.  In fact, there was still a smoking alter from the celebration to the summer solstice on June 21st.

Here, we were given some free time to explore the area, climbed 125 feet to the top of Temple II which sits directly across from Temple I, known as the Big Jaguar.  Both temples were built by Hasaw Chan K’awil around 700AD to demonstrate his might to the surrounding Mayan cities. 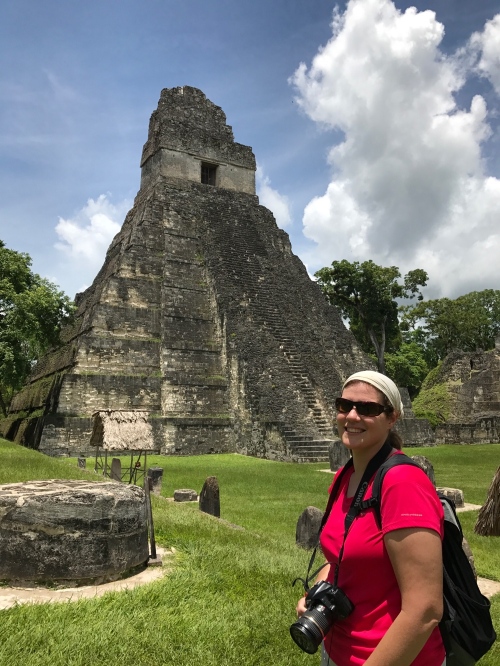 After a brief downpour (it is located in the rain forest), the sun peeped out and we were able to climb up and explore the North and Central Acropolis, and the surrounding temples.

After we climbed around the Great Plaza a bit, we hiked further into the jungle until we could see the top of Temple 4, the highest temple in the complex, peaking out from behind the trees.  Just as we arrived at the bottom to climb it, the sky opened up and it began to downpour.  Nothing like climbing the highest Mayan ruin in the world in the middle of the rainforest in the middle of a storm!

After being defeated by Caracol, another Mayan city that sits just over the border back in Belize, the city of Tikal was abandoned by 950AD when most of the Mayans living in the lowlands of Central America either died off or escaped to the highlands of Guatemala or Mexico.

On the way back to Belize, a couple we were traveling with had signed up to go ziplining, so we stopped off for a Gallo (Guatemalan Beer), sitting under the canopy while the rain came pouring down.

Our last night at Table Rock was relaxing, and today we topped off our stay here with a morning hike through the surrounding jungle, followed by an awesome breakfast of French Toast and grilled bananas.

We head to back to Belize City in a few hours to meet up with my longtime best friends to head over to Ambergis Caye to celebrate my 40th birthday.  I cannot wait, it is going to be unbelizable!