“Antisemitism is just fear of the unknown” our guide explained to us as we stared in disbelief at the remnants of the old walls of the Jewish Ghetto where thousands of Jews were forcefully crammed into to live on March 3, 1941.   We all know the eventual conclusion, which has fortunately led to a universal human rights initiative built around the notion of “never again” driven by testimonies of survivors.  In recent years, one of those survivors- Eva Mozes Kor- has become famous through her online tweeting and viral Facebook video advocating for the forgiveness of one’s enemy.  Eva’s story of how she has come to forgive Dr. Mengele and other Nazis who experimented and tormented her in Auschwitz in 1944, traces her struggle with torment and heartbreak, followed by forgiveness and acceptance.  And while Eva’s message of forgiveness is heartwarming and continues to resonate with millions, it is important that we truly understand what it is that she has gone through to bring herself to forgive.

Although Eva’s story starts during her childhood in Transylvania Romania,  her eventual deportation to Auschwitz-Birkenau makes Poland a pivotal place in her life. In order to tell her story better, and in an effort to get people to genuinely follow her message of forgiveness,  Eva began bringing groups of people to Poland years ago so that they too could bear witness to the atrocities that took place here.  This year I was fortunate enough to receive an educator scholarship to travel with Eva (and many others) to Krakow and Auschwitz to learn more about this terrible event, and more importantly to help Eva commemorate the loss of her family, all of whom perished in the final months before the end of the war.  Although Eva was not Polish and did not reside in Krakow or any other part of Poland when the Nazi regime took control, in order to understand how the atrocities that took the lives of her family unfolded, it is first necessary to understand a little bit of Poland’s history during World War II, particularly in regards to the Jewish population. Fortunately, we were able to do this during our first few days visiting Krakow.

I have to admit, when I first arrived in Krakow, I was thoroughly charmed with its giant medieval market square and pop-up farmer’s market and folk festival.  As charming as this city is, like many places in Eastern Europe, there is a not too distant, dark history that lies just underneath the surface that can’t (and shouldn’t) be ignored.   This became increasingly clear after visiting the Old Jewish Quarter and former ghetto on our first day of the tour.

Before World War II, there were 65,000 Jews in Krakow and 3 and 1/2 million in Poland.  Today, there are only 10,000 to 20,000 Jews left in Poland, with a mere 120 to 200 Jews still living in Krakow. The decimation of this once thriving and vibrant people started well before Hitler marched into Poland in 1939.  After creating policies to welcome and encourage European Jews to settle in Poland, King Kazimierz created a separate town to house the Jews who were facing backlash and false blame for starting a fire in the University center.  From the 16th century to the beginning of the 20th century, the Jewish community in Krakow thrived, contributing to the culture and economy of Poland.  Perhaps one of the most famous Jews was a woman named Helena Rubinstein who eventually emigrated to Australia where she invented the first modern mascara (Egyptians invented the original).  Today, her house, along with many other famous Jewish homes, synagogues, and restaurants  can be found on ulica Szeroka (Broad Street), which still functions as the main square of the old quarter, which ironically, is named Kazimierz, after the king.

Today, Kazimierz has become somewhat of a hipters’ paradise blended with a celebration of traditional Jewish culture for those who come from all over the world to pay homage to this space of memory.  Throughout the quarter, alongside microbrew bars, clubs, and hummus restaurants, one comes across unique wall murals, art, and live music celebrating the heritage of Judaism that the Nazis tried, unsuccessfully I might add, to wipe out so many years ago. 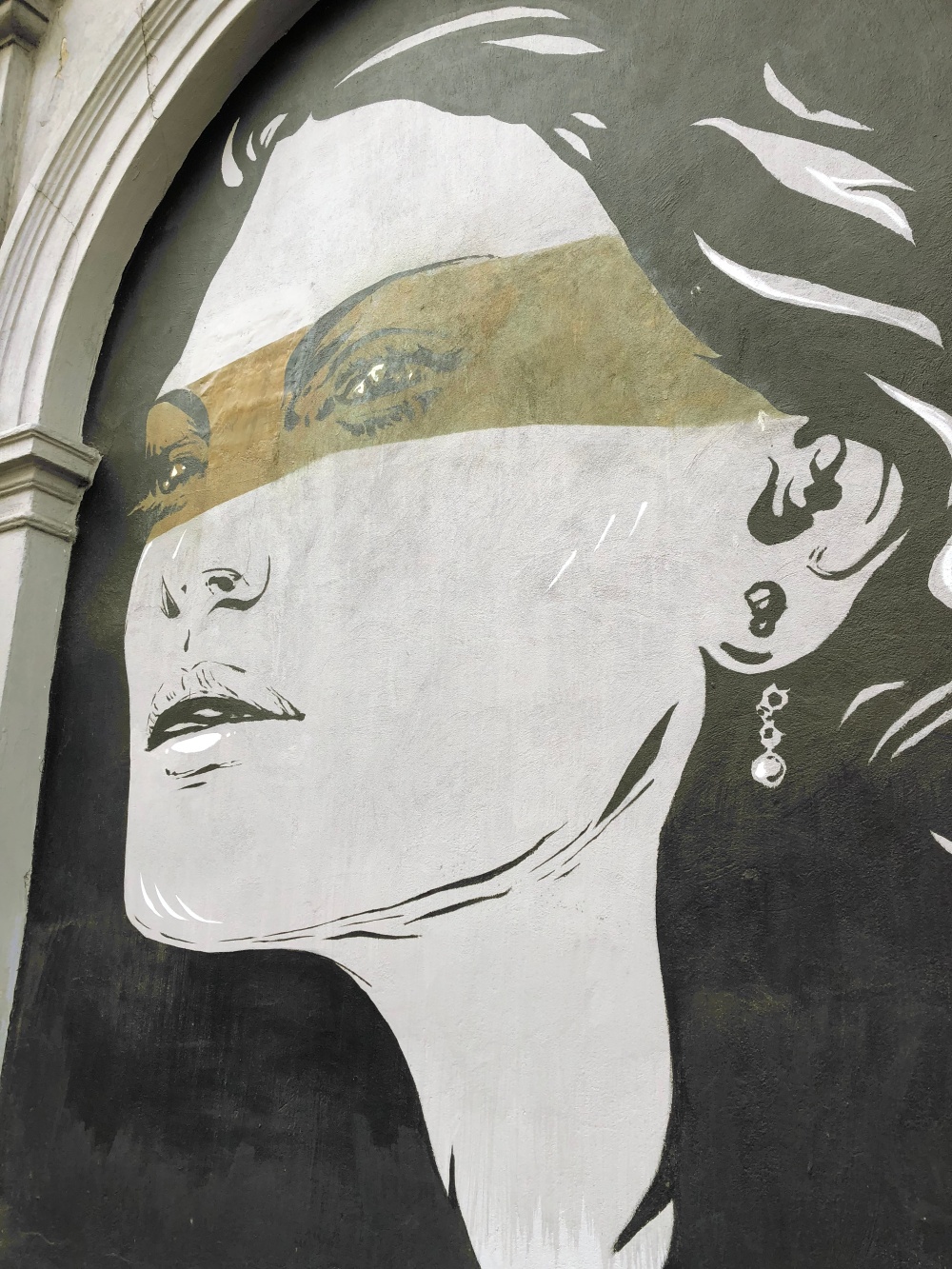 The ghetto, forever associated with Auschwitz, and eternalized in Steven Spielberg’s  film, Schindler’s List, began in March 1941, after German Hans Frank infamously proclaimed he wanted to remove 50,000 Jews from Krakow to make it the “cleanest town”.  At first, the plan was that there could only be 15,000 Jews put into the ghetto because that is the amount that would be needed for work in the factories.  These original inhabitants of the ghetto are memorialized in the square of heroes with chairs.

Chairs were selected for the memorial to symbolize the fact that many Jews carried all of their furniture with them into the ghetto, only to realize there was no space for it, resulting in them throwing chairs out the windows into the square.

Life in the ghetto became increasingly more difficult with special Jewish police forces set up so that Jews were actually forced to govern themselves.  With such crowded conditions, the square became the only place where one could get any fresh air.  It was also the place where one could come to sell and pawn items such as pots and gold watches.  As the year wore on, less and less food was made available to those living inside the ghetto, with the average Jew getting only 250 to 300 calories per day.  Of course, those Jews selected to work in Schindler’s factory were much better off. (More on that in a later post).

While most of those who read this are familiar with Schindler’ story, many have likely not heard about the famous Eagle Pharmacy that also was a symbol of resistance.  Just inside the ghetto walls, the pharmacy was run and owned by the only non-Jewish person inside the ghetto- Tadeusz Pankiewicz.

The pharmacy had existed before the ghetto and Pankiewicz was able to convince the Nazis to let him keep running it during the course of the war.  Strategically, Pankiewicz hired three women of non-Polish decent who resided outside the ghetto to work for him.  In this way, every morning these women would come to work and every evening they would leave, making it possible for them to smuggle in food, medicine, and supplies for the Jews, as well as relaying messages back and forth to loved ones and friends.  One of the more crucial items that they smuggled in was hair coloring., as looking young and healthy was essential to survival.  As a result of his efforts to help and hide many Jews throughout the existence of the ghetto, Pankiewicz has been acknowledged by Israel as being one of the “righteous among the nations.”

In 1942, the ghetto took a deadly turn when it was divided into to two sections; for those who could work (Ghetto A) and for those who couldn’t (Ghetto B).  On what is now known as Bloody Thursday (June 4th, 1942) those Jews who were living in ghetto b were hauled off to Auschwitz to make room for more and more Jews who wee increasingly coming in from the country side.  But as more Jews were coming into the ghetto, it was devastatingly shrinking in size. Also, in case there be any doubt as to what the fate of Jews might be, a wall went up around the ghetto that was designed in the shape of Jewish tombstones; a cruel form of Nazi propaganda that said to Jews the only way out was through death.

Our guide made a point to acknowledge that only in Poland these concrete walls went up, suggesting that it was because the Poles would try to help the Jews if not, and in ghetto; s that were set up in other countries this wouldn’t be necessary.  To be fair, even with the wall up, many Poles risked their lives and their family’s lives in order to provide food or false documents for Jews.

Today, part of the wall still exists alongside a small building with a pharmacy downstairs and apartments upstairs, which led me to a question that would haunt me throughout the rest of the trip-how can people live in such close proximity to these spaces?

In the end, Jews were segregated into ghettos because they were deemed as “different” or “dangerous”.  By ostracizing, segregating, and eventually deporting the Jews of Krakow to Auschwitz extermination camps, the Nazis began to carry out the first stages of the what would come to be known as the final solution.  Walking in the footsteps of what was once a vibrant Jewish community, and then a dismantled but resilient community, I began to prepare for what it would be like to walk in their final footsteps; the logical conclusion of what happens when we denigrate and fear the unknown.