Our two days in Hiroshima have been full with the most emotionally charged and powerful moments of the trip. Spending both nights with two different survivors of the Atomic Bomb; Mr. Lee and Mr. Ito respectively, and visiting the Jogakuin school which specializes in peace education and human rights, are undubitably the highlights of my trip, and among the most meaninful experiences I have had. It will be hard to convey all I've learned over just a short 48 hours, but I will try my best, if for nothing else but to carry out the wishes of both Mr. Lee and Mr. Ito, who both urged all of us to share their stories with the people around us, and particularly our students. But because there has been so much to process and reflect upon, I am going to break up my hiroshima post into two posts. The first (this one) will be about the Peace Memorial Park, the Peace Musuem, and the Jogakuin Middle and High School, the second post, which will follow, will focus on the testimony of Mr. Lee and Mr. Ito.

When we first arrived in Hiroshima, we checked into our hotel, which was located on Peace Boulevard, right across from the Hiroshima Peace Park and Museum. We first visited the Peace Memorial Park, the area of teh Nakajima district (downtown) which was vibrant before the bombing. The whole area was destroyed after the attack on August 6th, 1945, but today serves as a reminder of the horrors of war, commemorating those who lost their lives as a result, through differnent monuments.

First we visited the Memorial Tower for Mobilized Students.

By 1944, with most Japanese men being sent off to war, children were called up to work on farms and inmunitions factories, many of which were located in Hiroshima. On that day, about 6,300 children were killed by the atomic bomb. At the bottom of the tower stands a goddess statue that represents three religions, Buddhism, Shintoism, and Christianity.

From here, we walked around the cornere to the Hypocenter; where the bomb actually was dropped. This is just commemorated by a small plaque that lies on a busy street around the block from the Peace Park.

Back in the Peace Park, we visited the A-Bomb Dome, also known as Genbaku Dome. When the bomb hit, the building, which was originally called Hiroshima Prefectural Industrial Promotional Hall, was 500 ft from the bombs hypo-center. Because the bomb hit almost directly overhead, this was on of the few buildings left standing.

We then visited the Children's Peace Memorial, also known at the Tower of A Thousand Cranes. 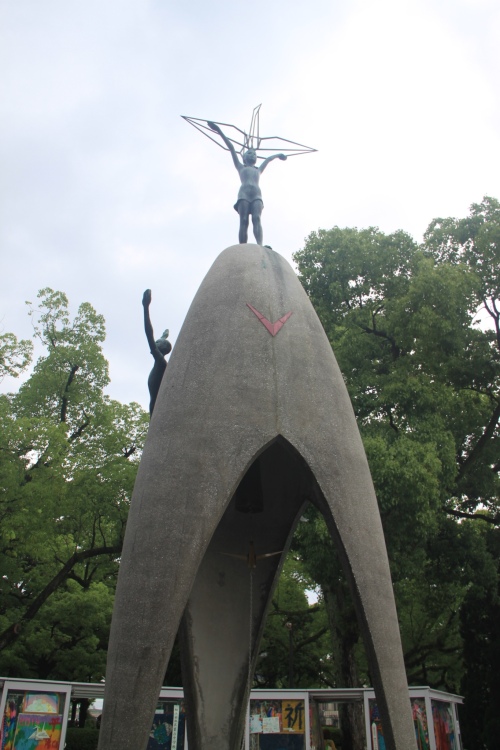 The monument is dedicated to all the children who died from the Atomic Bomb, and was erected in on May 5th, 1958. (May 5th is children's day in Japan.) The monument is a direct result of the efforts of Sadaka Sasaki, the young girl who, when diagnosed with Leukemia 10 years after she survived the bombing, and started to create paper cranes with the belief that they would make your wishes come true. Since then, the paper crane has come to symbolize peace and remembrance of Hiroshima. The monument is inscribed with the following words: ” This is our cry, this is our prayer, for building peace in the world.”

Next on the walk was the Cenotaph; which frames the A-bomb dome, as well as the eternal flame which will stay lit until all the nuclear weapons in the world are eliminated. It's a lofty idea that many would consider unrealistic but nevertheless, I hope that flame goes out one day.

We then made our way to the Monument in Memory of the Korean Victims of the A-bomb. During the war, many Koreans were forced to Japan and forced to work towards the war effort, working in factories, etc. On that fateful day of August 6th, it was believed that there were 50,000 Koreans living in Japan, and 30,000 of the were killed by the blast. 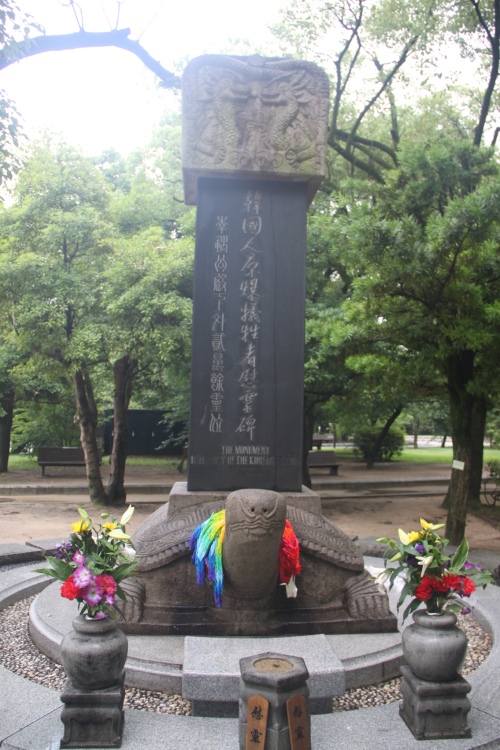 Built in 1970, the monument follows Korean tradition that says when a person dies, their souls will rise to heaven on the back of a turtle. The stone comes from Korea, and the monument was created in Korea as well.

On our second day in Hiroshima, we visited the Jogakuin school, a Christian school which in addition to the regular curriculum, also specializes in peace education and human rights.

The school, established in the mid 19th century, is an all girls school that is comprised of middle and high school students. We were given a brief tour of the beautiful, recently renovated campus; visiting the faculty lounge, the chapel, and then the cafeteria where we were instructed to pick out something for lunch.

This school lunch, unlike some of our previous experiences where we sat like zoo animals, we had the amazing opportunity to chat with the students who most spoke English. My lunch buddy Sue was an amazingly bright and insightful kid who shared with me her views on peace education, nuclear energy, international relations, and current events. This 16 year old, passionately against nuclear energy and for peace, expressed possibly working for the United Nations in the future. I think the world would be a much better place if we had people like this ruling the world.

Warning; Pictures Below Are Distrubing!

On our second day in Hiroshima, we visited the Hiroshima Peace Museum which contextualizes the dropping of the A-bomb on Hiroshima, and provides exhibits and artifacts that show the horrorible effects of that decision.

After the bomb, those who were near the hypo-center had their skin burned, often desribed as dripping off of them like in the picture below.

There clothes, which we learned from Mr. Lee were often loose because of summer, were easily burned through and disintegrated.

Those who survived the blast initially but were exposed to radiation, would often find their hair falling out in the weeks and months to follow, which was a sign that you were about to die.

The A-bomb completely destroyed and flattened Hiroshima, which was never fire bombed during the war, so that the U.S. could see the full damage of what an atomic bomb might do to a city. It is important that when discussing the bomb, and whether or not it should have been used as a war measure, that we remember the human side to it, and try to prevent a tragedy of this magnitude from happening again.