“English is Delicous” is just one of the many phrases my host dad used to explain things in Wakayama. With warnings of a Typhoon approaching, we were all a little concerned about upcoming homestays in Wakayama prefecture, in Arita city. When we arrived however, and were greeted by the warmth and friendlines that seems to be inherent among the people here, all my worried were put at ease. On the first day, though we were scheduled to have a welcome party, because of the impending typhoon approaching the area, they changed the schedule a bit and we wound up visiting the Tangerine Museum. Apparently, this area was famous for its tangerines and oranges.

After visiting the musuem, were taken to city hall where we offically met our host families.

I would be spending the next three days with the Yoshimatsu family. Yoshimatsu Toshitaka is a retired teacher of science, along with his wife who was a retired teacher, and his 90 year old parents who were also teachers. When arriving at their house, I was shown to my room; essentially I was staying in what I like to call the “Mike Seaver” appartment above the garage. I had an en suite room, with my own living room. I felt as if I had my own private Ryokan.

The next morning, after a delicious home-cooked breakfast of rice balls, cucumbers, egg salad, and japanese pumpkin to name just a few of the items, we were taken to visit the Bunsei Middle School. We were greeted by the principal, then directed to the auditorium where we were entertained by the students who performed Judo for us, with one kid, seemingly acting as the Karate Kid, surrounded by three others, wearing shirts that said in English “Bad Boy” on the front and “Crazy” on the back. As with the last school, however, we are not allowed to post pictures of students online…so use your imagination:)

After the little show performed for us, we were each taken by a small group of students who showed us how to do such things as origami and koma. It was quite fun.

Later in the morning, we were taken to the Mayor's office where we met the mayor of Arita city; a young man in his 40s who eminated warmth and welcoming. In the afternoon, we headed to Itoga Elementary School where again, we had lunch with the students. This time, Vikas and I were placed in a 2nd grade classroom, where students served lunch and cleaned the room afterwards. As with the other schools and most of the places we have visited thus far, we were expected to take our shoes off before entering the building, and given slippers to wear inside.

In the afternoon, we headed to a local rice field and were put to work, plowing through the field with the aid of elementary students. Unfortunately, my host family has all the pictures of this, so I will have to wait till those are emailed to me. This is the rice field.

That evening, we all stayed at the city hall, changed back into nice clothes, and prepared for the offical welcome party we were supposed to have the evening before. Before the ceremonies, we were given the chance to learn how to make rice balls and help prepare sandwhiches for the event.

The evening began with much formality, and continued with good food, good drinks, and good laughs. Exhausted, I went home and retired to be rather early, ready for an eventful next day.

Day three of our homestay in Wakayama was perhaps my favorite. I started the day visiting _________ local Buddist temple where he prays. He asked special permission for me to come inside, and encouraged me to take pictures as he explained the little, yet ornate, temple.

He explained, that much like the larger Buddhist temples we have visited throughout Japan, this temple has three altars with three different Buddhas. The one in the center is the Buddha from India; the main teacher, and the two Buddhas on the side are local Japanese Buddhas who spread beliefs throughout Japan.

He also showed me a beautiful decoration his grandmother contributed to the temple over forty years ago.

Later that morning, we picked up the rest of the family and drove to Shirasaki Ocean Park where I was treated to some of the most breathtaking views I have yet to see. All along the coast, limestone cliffs hang out to form a beautiful, yet at times, threatening coastline.

We continued driving along the coastline until we reached a small cave which we explored for a bit.

Before we had to meet the rest of the group, I was taken to a local bar/restaurant to have Japanese Pizza, called _______________. Made of a pancake sort of batter, filled with shrimp, beef, and squid, the pancake is thrown onto a hot griddle, fried on both sides, then covered with soy sauce and mayonaise, and topped with seasonings and dried fish before being served. In spite of that description, it was quite good.

In the afternoon, we were all to meet at the Museum of the Burning Rice Fields, which is also serves as the Tsunami Education Center. The center is also is home of the archives of Hamaguchi Goryo, the revered man who saved the town after the Tsunami and Earthquake of 1854. Apparently, he created an escape route for those villages who were stuck down below by burning the rice sheaves, using them as landmarks so they could find there way back. The story made its way into Japanese textbook between 1936 and 1946, but then disappeared. After the Great Earthquake and Tsunami of March 11, 2011, the story has now reappeared in Japanese textbooks, serving as an educational ancedote of what to do in such an emergency.

We then headed to a local wine factory, where they make wine and liquor out of oranges. We enjoyed a little tasting before heading back home to our homestays for the last evening.

Oh yeah, I spotted Gypsy in the Wine store!

For the last evening, we had Floating Noodles (Soma) that we had to grab out of the river like basin as they were dropped in.

The whole family was in the backyard for the floating noodles, followed by a Japanese bbq. I had the great pleasure of sitting next to Yoshimatsu's mom and dad, who are 93 and 90, respectively. Amazing!

The evening was capped off with fireworks outside on our own, followed by a fireworks show somewhere in the distant mountains. 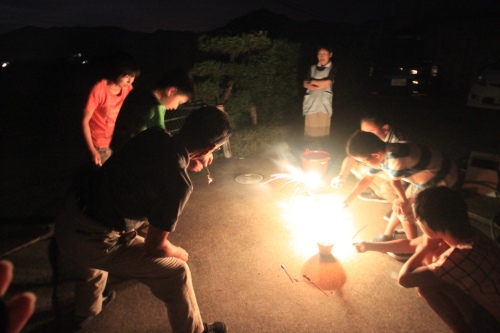 Our last morning, we all said goodbye at the train station, sad to say goodbye again to such a warm and welcoming family.