In addition to numerous temples and shrines, Kyoto is also home to some of the most interesting nightlife, which for us, included some Karaoke and Geisha hunting.

The Gion district, filled with micro bars and little restaurants, provides a good example of Japanese social life. Like traditional Japanese houses, many restuarants have small rooms with sliding doors for privacy. In addition, many bars only seat about 8 people at the most, making it rather difficult to meet people, but good to go out with friends. It seems as if everything in Japan is about privacy and intimacy, which is perhaps most true in the Gion district and around the Ponto-cho area.

On our first night in Kyoto, we took the train down to the Gion district to meet up with some other teachers who were on a study tour from Mercy College. We chatted with them for about 10 minutes in the pouring rain, as we walked around Yasaka shrine. We then found our way down a narrow alley way to a little restuarant overlooking the Kamo- gawa river.

Unfortunately, the rain put a damper on our time in the Gion district that night, so we would have to come back to truly appreciate it.

The next night, we ended up at a roof-top beer garden for dinner, followed by a round of karaoke at a place right next to our hotel. Everyone wound up singing, and some of us learned dance moves we didn’t know we had.

The next evening, after eating a collusal amount of sushi, some of us headed back to the Gion district for a little exploring and harmless geisha stalking.

As we walked around Ponto-cho; famous for small tea houses and restaurants where geishas entertain Japanese businessmen, I completely freaked out when a geisha appeared walking briskly down the road, perhaps to get away from crazy, hysterical tourists like myself. This was the best picture I could get in my frantic state of awe…

Fortunately, we headed back to Ponto-cho the next evening, and this time I was much more composed and able to get some decent shots.

Contrary to what many may think, geisha are not high class prostitutes. In fact, because it is so difficult to become a geisha, they are held in extremely high regard within Japanese society. Before becoming a geisha, one trains as a maiko, learning the art of pouring tea, playing games, serving food, singing, and playing musical instruments to name just a few of the many talents geishas are expected to have.

While walking around this section of Kyoto, a mysterious world of secret sliding doors, black cabbies, and red lanterns gives a glimpse into an ancient custom that is still very much part of the social fabric of Japan, particularly in Kyoto. On numerous occassions, we saw multiple cabs pull up, and idle outside an old wooden house, with a lit red lantern hanging outside, and within minutes, a geisha or maiko, or both would be scurried out, protected by their handlers, and we would see them waving goodbye to the businessmen they just spend the evening entertaining.

On other occasions, we would be walking down the street, when a wooden door would slide open, and out would pop a geisha, hastily moving away from us, presumably on to her next appointment. 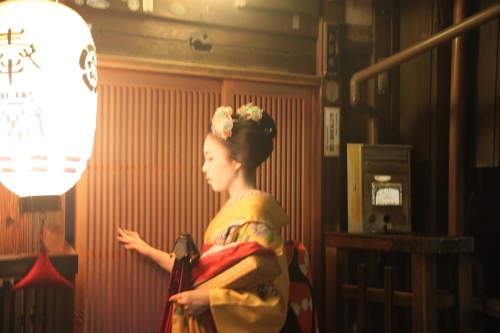 Seeing real geishas and watching the intrigue of Ponto-cho unfold infront of us, was definitely one of my favorite experiences thus far.

Perhaps the only thing that could possibly top my personal “Memoirs of a Geisha Stalker,” was visiting the Kyoto Museum for World Peace, where we had the amazing fortune to meet Yoshiko Tanigawa, a local peace activist and volunteer at the museum.

The Kyoto Musuem for World Peace is the first university attached musuem in the world. Established in 1992, the message of the musuem seems to be to honestly show the aggressions of war, as well as models of active peace building, in an effort to engage people in fighting for peace. Ironically, this musuem was designed by the same company that created the War Musuem in Tokyo, glorifying Japanese imperialism and militarism.

Unlike Hiroshima’s Peace Museum, which portrays Japan as a vicitim, this musuem painfully acknowledges and confronts Japan’s role as an imperial and aggressive nation at the end of the 19th and early 20th century. At times it can be difficult to categorize the Japanese when discussing issues of war and peace, particularly in the 20th century. Speaking on the subject however, Yoshiko stated, “We are aggressors, but we are also victims.” But rather than these be just empty words, throughout her time as serving as our guide, Yoshiko gave examples to demonstrate the nuanced role of Japan as both aggressor and victim. For example, when speaking about Okinawa after its invasion, she stated, “People in Okinawa experienced the same kind of discrimination as that experienced in Japan’s overseas colonies.”

Amazingly, most of the musuem is on one floor, in a relatively small room when one considers the subject it is trying to convey. There are graphic photographs of war, alongside pictures of peace activities throughout the 20th century. There are also peace posters, textbook accounts of the atomic bomb from multiple international perspectives, and cartoons depicting aggressive actions taken by multiple nations in recent history.

But as mentioned earlier, just talking with Yoshiko about issues of war and peace, was even more enlightening than this amazing little museum could ever have been on its own. For example, on our way up to the second floor, which has some small exhibits promoting peaceful activities throughout the world, Yoshiko asked us if we thought “the absence of war means there is peace?” Such a thought-provoking question, I could not answer without some serious consideration. I’m still trying to grapple with this almost four days later.

For those that may not know, Japan’s role as a peaceful nation post World War II was clearly deligated in article 9 of its constitution. What many more may not realize however, that as of July 1st this year, Japan’s government has voted to interpret that section of the constitution differently, and for the first time in over 60 years Japan will be able to raise an armed force to send abroad to help nations such as the US and UK in their overseas activities. Yoshiko assured us that the peace movement in Japan, (which started well before World War II by the way), was in the process of organizing protests and sueing the government for violating the constitution.

Meeting Yoshiko at the museum was one of those rare moments when you feel as if fate had intervened. An amazingly gracious, intelligent, and passionite woman, it is refreshing to know there are still people like Yoshiko who continuously works to make this world a better place for generations to come.