Kyoto, which literally means “capital”, is one of the few cities that was not bombed during World War II due to its historic, religious, and cultural significance. From 794 to 1868, Kyoto served as the ancient capital of Japan, and was originally called Heiankyo, which meant “Capital of Peace.” This important city was not only the center of an imperial power one time, but also served as a centerpoint for Buddhism and Shintoism in ancient Japan.

When discussing religioun, most Japanese people practice both Shintoism and Buddhism, though if asked, many will say they are not religious. Buddhist temples are more focal to the larger community, while Shinto temples allow Japanese to worship their ancestors in a smaller setting. Throughout Japan, and particularly in Kyoto, one can find numerous temples and shrines that have peacefully coexisted for thousands of years. Here are just some of the highlights.

After a sad goodbye to our host families in Obu, we hopped on a train to Kyoto, and visited our first sight; Sanjusangendo Temple. This Buddhist Temple was commissioned in 1164 during the Heian period, at the height of Buddhist influence in Japan.

Inside the temple, there are 1001 statues of the Buddhist Goddess of Mercy. After a fire in 1249 destroyed many of them, the temple was rebuilt in 1266. The statues are protected by 28 guardian deities, which is just one example of the influences of Hinduism in Japan during this time.

This is perhaps one of the most interesting sights in Japan, and undoubetdly one of the most controversial. During the reign of Toyotomi Hideyoshi in the 16th century, the Japanese invaded Korea in order to get to China. During these invasions, Hideyoshi wanted proof that Japanese soldiers were actually killing soldiers in Korea. It was customary at the time to bring the head of your enemy back as proof of their death, which could lead to a promotion, but it was thought that this would be too difficult to do from Korea. Consequently, they decided it would be easier to bring back the noses and ears of their enemies instead, which were then “pickled” to preserve them. Due to the belief that if you kill your enemies and don't put them to rest, their spirit will continuously haunt you, the Japanese buried the ears and noses in Kyoto. As an unofficial monument that doesn't get government funding, Hideyoshi's ear tomb only started to appear in Japanese guidebooks in 1980, but has recieved much backlash from Koreans and Chinese, though today, these are the majority of those who visit. It's a very strange sight that sits on a street corner in the middle of what is seeminlgy a residential neighborhood; I cannot imagine living across from a pile of ears and noses…bizarre!

The next day, we hopped on a train that took us to Nara; the first permanent capital of Japan, even older than Kyoto. Our first visit was to Nara Deer Park, which is populated by over 1,000 deer who wander about freely, hunting down tourists who presumably have food.

The Deer Park eventually leads up to the entrance way to the Great Buddha Hall at Todaiji Temple. When first entering the hall, one comes across the Nadai-mon; a giant gate made from cyprus trees, which houses two giant wooden statues, that serve as the guardians of the temple.

Constructed in the 752, the entrance way is lined with stones that came from Japan, China, Korea, and India, as the temple was created in honor of the introduction of Buddhism into Japan in 552.

Inside the temple, lies Nara's famous Daibutsu (Great Buddha), one of the largest bronze Buddhas in the world. The statue was rebuilt during the Edo period at 15 meters tall, only 2/3rd's its original size when it was first constructed in 746.

The positioning of Buddha's hands are supposed to convey the message; “Do not be afraid,” and “I will help you.” A very comforting place.

After having a traditional Nara lunch that afternoon, we headed to Fushimi Inari Shrine with the intention of hiking up to the top of the mountain it inhabits. 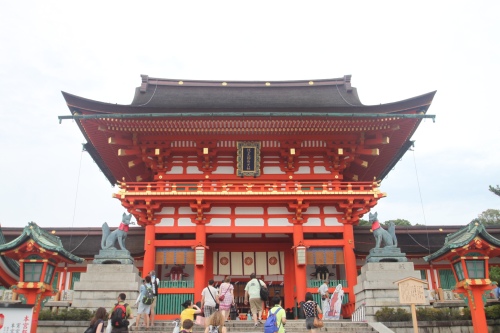 This Shinto shrine was founded in 711, and holds more than 10,000 red Torii gates. Originally dedicated to the gods of rice and sake, the shrine is now associated with prosperity in business. There is a paved pathway line with red Torii gates, many of which are purchased from local businesses, as well as many statues of foxes, considered the god of rice harvest and today, business.

Another important Shinto shrine in Kyoto is the Kamigamo Shrine, where we were the special guests of Reverend Mitsutaka Inui; a Shinto priest.

A Unesco World Heritage sight, the shrine was founded in 679, is dedicated to Raijin, the God of Thunder. It is also the oldest Shinto shrine in Kyoto. When entering the shrine, we first passed through two Torii gates.

Once passing through the gates, we were led by Reverend Mitsutaka Inuii in a purification ritual that is done at most Shinto shrines, where one washes first their left hand, then their right, and then their face before entering the shrine.

We were then invited to visit the inside of Haiden Hall, where we were treated as special guests and participated in another Shinto ritual.

Daitokuji Zen Temple and Vegetarian Lunch
After leaving the shrine, we headed to Daitokuji temple, one of the most important Buddhist temples in all of Kyoto, to eat a special vegetarian lunch.

There were times when it seemed as if the food would never stop coming, but fortunately it did.

After lunch, we had the opportunity to visit three sub-temples of Daitokuji; Daisen-in, Koto-in, and Zuiho-in. All three were spectacular.

Daisen-in, famous for its rock gardens, was definitely my favorite, unfortunately no photography is allowed inside. Zuiho-in and Koto-in are equally impressive, but also no photography once inside the temples. Fortunately the views from the temple compound are beautiful as well. 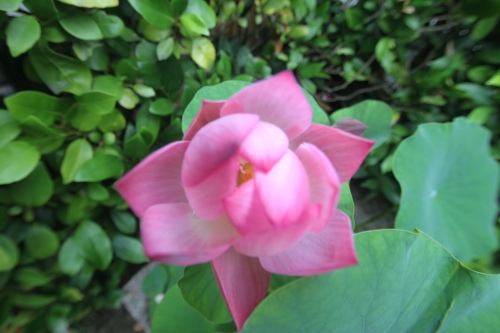 Buddhism and Shintoism have coexisted for thousands of years in Japan, and both have influenced beautiful temples and shrines throughout the nation. Perhaps no other city however, can brag of more magnificent ancient places of worship than Kyoto.