As mentioned in my earlier post, getting up at 3am, traveling by train for a few hours, then meeting our host families who we would be going with for the next three days, was an exhausting experience, but well worth it.

When we arrived in Obu, we were greeted at the train station by representatives of the Obu International Association who accompanied us to city hall. After many introductions and speeches, we met our host families. I would be staying with the Sakurai family for the weekend, which I was excited about.

After first meeting Hideyo and Ayana, we said our goodbyes to the rest of the group and headed back to their home. At first I was a little nervous because I do not speak Japanese (though I have picked up about 5 phrases), and the families' English proficiency was listed as “fair”. After meeting them however, I realized we would not have problem communicating….and for those times we did, there was always google translate:)

The first night, we spent talking over dinner and getting to know each other a bit. Ken, their son, also showed me a few archery moves that he was learning in school.

The next day, my family drove me back to city hall, where we were all scheduled to visit the local middle school and high school for the day. Warning: we were instructed not to share pictures of students online, so I will not be able to show any of those, but I can share some pictures of the school.

Some observations about Japan's School System:

1. Disipline: With seats right next to each other, and classes with 40 students in them, Japanese teachers do not have to focus on classroom management suprisingly, but are free to focus on content and instruction.

2. Respect: Not only did I witness a great amount of respect from students to teachers (whom they call Sensei), but also from student to student. When class is dismissed, the students all stand, the teacher formally dismisses them (regardless that the bell has already rung), and the students bow to him/her before they leave. Amazing!

3. Self-Initiative: Students often take the initiative to monitor classroom discipline if a student acts out. They are also in charge of serving their own lunch to each other, (Students eat with their classes and teachers in classroom), and cleaning up after lunch is over. After school, most students partake in club activities, some of which function without a teacher always supervising. For example, we witnessed the archery team practicing with no adult supervision!

3. Cleanliness: Both after lunch and after school, students, not custodians or teachers, are given 15 minutes to clean the classrooms, hallways, and bathrooms. From what I exhibited, the building was immaculate and the classrooms neat and tidy. Also, when entering the school, everyone is expected to leave your shoes behind and wear slippers which are designed for the inside, so as to keep the school clean. When entering the bathroom, one is also expected to remove their “inside slippers” for bathroom slippers.

Here are some pictures of the school:

After a very long, but rewarding day of talking with students and teachers, I had a great evening at “home”, enjoying a home-cooked diner and some calligraphy lessons.

I think my turned out pretty good:)

The next day, I awoke early and we headed around the corner to a local shrine to watch the Sumo wrestlers practice.

After Sumo, my family took me about an hour outside of Obu, to the city of Inuyama to visit the castle there. The Inuyama castle, built in 1537 by Oda Yojirou Bouyasu, is the oldest standing castle in Japan.

Lorship of the castle changed frequently throughout the years, but it was designated a national treasure in 1935 and has withstood monsoons, earthquakes, and many wars and battles over the years.

My family arranged it so I could go on an English speaking tour; very generous and thoughtful! With our guide, we climbed to the top of the castle, which offers incredible fews of the surrounding area. Of course, during the Samurai period, this would be used as a look out. 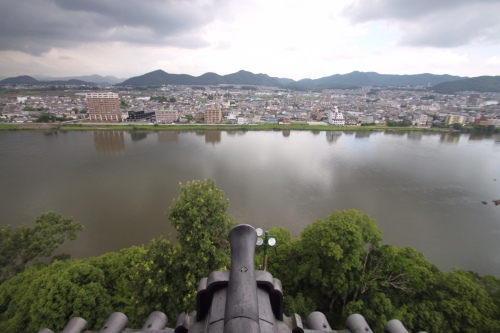 After our visit, we walked around the old town of Inuyama, and my family treated me to lunch at one of the little resturaunts lining the streets leading away from the castle. There was also time to play dress up:)

After strolling around a bit, hopping in and out of souvenir stores, we walked over the river to visit the Jo-an Tea Ceremony House, one of the three best in Japan. Built in the 16th century in Kyoto, the tea house was moved to Inuyama after the Meiji period. Here, we walked through the beautiful and scenic garden called Urakuen, then enjoyed traditional Japanese tea and a been paste desert.

Visiting Inuyam city was like going back in time to medieval Japan, but we were soon back in modern Japan, when my host family took me to the Asahi Brewery in Nagoya city. After a tour of the facilities, we were allowed to drink three different types of beer. The only problem is, this must be done within 20 minutes. I found out first hand, that drinking in Japanese culture is done quickly!

A perfect day, was capped off with a perfect night. When we arrived back in Obu, we had to pick up Ken at the school; this kid is truly amazing! After visiting Sumo with us at 730 in the morning, he took a practice test for university entrance for 4 hours, then went to club activities at school until 6, and we were now picking him up to bring him to volunteer at the lightningn bug festival at the local park. After we dropped him off, the family took me out for Udon noodles, a thick type of noodle served in a broth with toppings of your choice.

That night, sitting around the table, Hideyo told me that they have a traditiona in the family that on July 7th, they write wishes/resolutions and hang them from a tree; they do this once a year. She asked me if I would fill out a wish to hang on their tree next week. I wished that I would have the opportunity to visit this lovely family again someday, and that hopefully, one day they can visit me in New York. I loved my stay with the Sakurai family. They were all so generous and gracious, I truly felt like I was at home and hope one day to reciprocate their hospitality.