Arriving in Brazil via the State Department's Teachers for Global Classrooms Program is a little different than when I usually arive in a country. Since we left Altanta, we have been treated like royalty, and, although I am not used to traveling like this, I am trying to “embrace the ambassadorship”, as suggested by our in country organizer, Sarah.

Aftrer an overnight flight, we arrived at the Royal Tulip Hotel, which most guidebooks dub as the nicest digs in town. One even claims that this is the hotel of choice for President Obama and other foreign ambassadors, when visiting Brazil. I have stayed in worse places.

Here I had my first taste of caipirinha; the national coctail of Brazil. 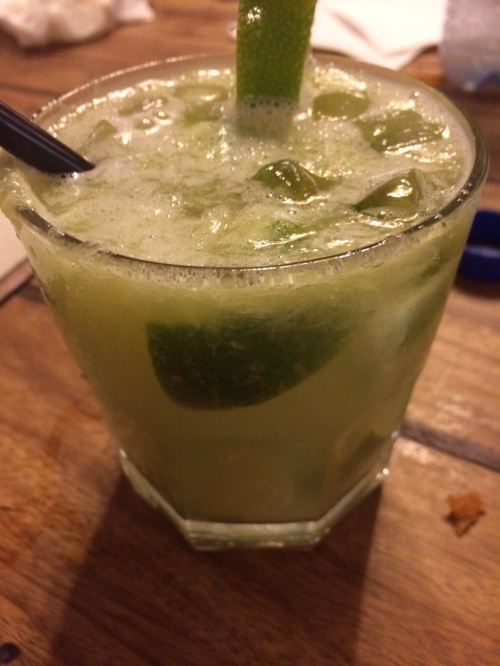 To break up the day a little bit, we were taken to the local park. Larger than Central Park in New York, the Parque da Cidade is the largest city park in all of Brazil. One of the few places in Brasilia where we one can actually witness Brazilians going about their daily lives, the park is filled with a a variety of activities, including amusement rides, paths for walking, bicking, and skating, go-carts, etc.

After a day of relaxation at the hotel, we began the program with a workshop on Brazilian history and culture led by our in country consultant, Liberado. Here is a brief synopsis of what we learned about Brazil:

In the afternoon, we set out for our cultural tour of Brasilia….capital of Brazil, (come on, admit it, you thought it was Rio). Let me start by saying, Brasilia is one of the strangest cities I have yet to visit. In 1955, Juscelino Kubitschek ran for president on the campaign slogan that he would be able to achieve in 5 years, what normally would take 50. In 1956, after his election, Kubitschek began construction on this futuristic, modern city, built in the middle of nowhere. By moving the capital from Rio to Brasilia, Kubitschek hoped to promote the development of inland Brazil. Bizarrely, because of its historic value as an exemplar of what people in the 1950s thought the future would look like, this “futuristic city” was dubbed a UNESCO world heritage site in 1987.

Know for its modern, “space-age” architecture, Brasila is the brainchild of Oscar Neimeyer and urban planner, Lucio Costa. From an arial perspective, Brasilia is designed in the shape of an airplane, which one can also see when looking at a map of the city.

One of its architectural highlights include the Catedral Metropolitana de Nossa Senhora da Aparecide.

Outside the cathedral stand giant, pigeon-flanked statues of the four apostles. 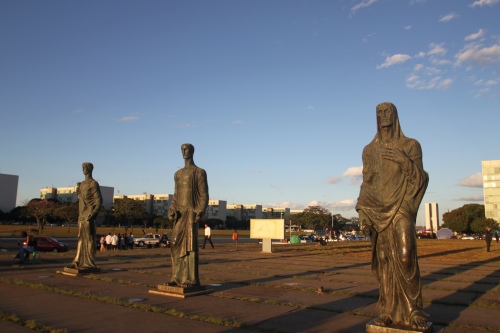 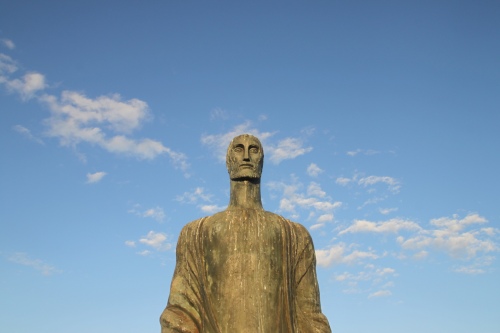 The area surrounding the church is popular with tourists and local alike. There was even a beer van outside, well equipped with Brazilian hipsters selling artisinal beer.

After a few trips to a few malls (which is where much of Brasilia's life takes place), we stopped off to visit the soccer stadium. Renovated just in time for the World Cup, the stadium was built to resemble the 1960s architectural style of the original city plan.

On our second day in the city, we started the morning with a trip to the U.S. Embassy, where we were debriefed on health, safety, and education issues.

The goal of the embassy is to promote a bilateral partnership between Brazil and the United States on a variety of issues. One of the most interesting briefings came from Jason Banks; the head of security at the U.S. embassy. A big, burly, loud guy, Jason shared some safety tips for anyone visiting Brazil, in order to prevent us from becoming victims of “crimes of opportunity.” He also shared with us that, in preparation for the Olympics, the U.S. government trains local and national law enforcement security forces, leaving a giant security apparatus in place after the games are over. It would be interesting to see how this might come to affect lower class citizens and petty crimes.

As a “capital” city, Brasilia is not the norm for the rest of Brazil. In fact, our in country consultant, Liberado continues to refer to it as “the bubble”, which is what is exactly what being here feels like. There is zero street life, with most restaurants and shops existing indoors, usually in large inside shopping complexes or malls. Also, compared to better known cities such as Rio and São Paulo, Brasilia has very little poverty, none of which is visible. Although it is an interesting city to visit, I am looking forward to heading out to my host city to experiece authentic Brazilian culture. First however, we need to learn a little more about the Brazilian education system.