As the focus of the Teachers for Global Classrooms Program is to learn about other cultures and classrooms, much of our time in Brasilia was spent at briefings about the state of education in Brazil. If you're really interested in the details of Brazilian education, especially the history of it, check out my official blog for the program at:

If not, here's a shortened version of some of the highlights of learning about education.

During our time in Brasilia, we were able to visit both a federal institute, (which is the equivalent of a community college in the United States), and a very swanky private school, that is funded by wealthy agri-business moguls. Which brings me to one of my more interesting observations.

As in the United States, there is a quaity of education issue throughout Brazil. In fact, there are many similarities in terms of privileged economic classes having access to better resources and better schools, while less privileged students often struggle to attend the best schools. In Brazil, private schools are getting more and more expensive. While it is advantageous for students to attend private elementary and high schools, at the higher education level, well funded public universities are better than the private ones. On our third day in Brasilia, we visited a Federal Public Institute. Because there is a transportation strike going on however, very few of the students were at the school. Transportation strike = snow day!

At the Federal Institute of Brasilia, we learned more about public education from the principal. Fun fact: In many schools throughout Brazil, the principal is elected by the other teachers within the school to serve a term of about 5 years.

An example of how the current sytems privilages the upper economic classes goes as follows: Elite students often go to private elementary and high schools, then do well on the examinations to get into the well-funded public universities, leaving little slots left for non-elite students who did not have access to these resources and now are forced to attend a private school, which often does not have adequate funding to run full programs. For example, they cannot have full Biology programs because they cannot afford the equipment.

The private school we visited (Sigma Asa Norte) had so many resources it seemed absurd at times. In addition to state of the art science labs and cooking facilities, they even have an entire room for circus training. You cannot make this stuff up.

After touring the school, listening to a panel of both students and teachers, we were treated to a cafeteria school lunch; admitedly it was pretty good. 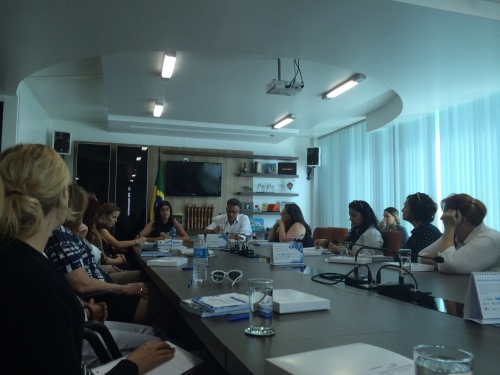 The question came up often over who was in charge of the curriculum, if there was a national curriculum, and if so, who had to follow it? Similar to the United States before the onset of the Common Core, Brazil has national guidelines, which have been developed by the Ministry of Education at the federal level. Individual states have the freedom to specify the curriculum to their local needs.

Brazilian teachers have interesting schedules. Classes in Brazil can run from 7-12, 1-5, and 7-10 at night. Depending on how much a teacher makes at one school, they may have to work in multiple schools to improve their salary. For example, some teachers sign a 40 hour contract with one school, and a then a 20 hours contract (part-time) with another in order to supplement their income. In some cases, this causes teachers to be absent from one school because they are teaching at the other..

In an attempt to deal with racial issues, Brazilian education has begun to really focus on teaching and learning about the traditions and cultures of its African roots. This month in particular, is Afro-Brazilian History month. Here are a few of the items I observed on one of our school visits. 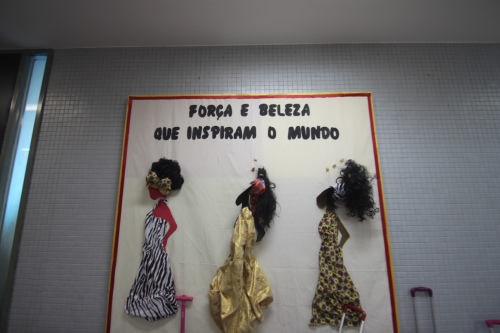 Though we in the United States might find this somewhat offensive, Brazilians have an entirely different way of discussing race and racial issues than the United States. That is not to say that one way is better or worse, but that both countries struggle to find ways to deal with issues of race and cultrual sensitivity, albeit in different ways.